Well, that’s ONE kind of sour dough but hardly the only one, all sorts of breads from very subtle to very tangy to sweet breads can be made with sourdough. That’s because sourdough isn’t a particular style of bread, it’s a technique.

“Sourdough” doesn’t specifically refer to sour dough or tangy, acidic flavour. The term sour here means “fermented” or cultured, as it does in sour cream or sauerkraut.

What’s happening in your sourdough starter?

Basically, when you’ve got your starter active and working well, you have the symbiotic activity of two critters, wild yeast and bacteria, who each produce something the other likes and that other possible competing cultures do not.

To be more specific, you have a yeast called Saccharomyces exiguus co-existing with a bacteria called Lactobacillus sanfranciscensi. The yeast metabolize the complex sugars in the flour and water mixture and the bacteria feed on the metabolized product. In turn, the bacteria produces acids which change the ph balance of the flour mixture to a level that the yeast quite enjoys while it’s a bad ph level for other organisms, thereby keeping the flour free from unwanted cultures. While your yeast is happy in it’s perfect ph environment and chewing up the sugars, it releases gases and the now wet flour with it’s stretchy gluten traps these into small bubbles causing the dough to rise. The bacteria, in the meantime, produces the acids the yeast likes and this also gives the dough the distinct flavour people associate with San Fran style bread.

Is it true that you have to “catch” yeast from the air? What if my air doesn’t have yeast? What if I don’t live in San Francisco?

This is an interesting story and makes cool tales but it’s not really true. Yes, there are probably yeast (and other) spores floating about everywhere, whether you live in an old farmhouse or a brand new condo, but not necessarily any that you want growing in your dough and certainly not in any quantity that would be helpful. If you’re going to make your own starter “from scratch”, the yeast you want is already on the wheat kernels or rye berries the flour was made from and they got there when the stuff was growing in the fields.

Regardless of what Alton Brown and his sock puppets may have lead you to believe, leaving an open bowl of flour and water by an open window does not improve the chances of “catching” wild yeast, at least not the ones we’re trying to get. It will improve the chance of dust and dirt and other foreign critters getting at it, probably slowing down your starter as you then need to weed out the invaders so only your two pals can take over the flour soup. Alton is also seen starting up about a gallon of starter which is an insane amount. We like Alton but he got a fair bit of info on this one wrong.

Using the right type of flour supplies all the original yeastie beasties you want and they’d be in there even if you put a lid on your batter mixture and never exposed it to air. Organic stone ground rye is the most logical being not only teeming with the right type of yeast on it’s surface but also easily procured and readily available; the organic stone ground part means the yeasties on the grain won’t have been processed into oblivion. You could start with regular white bleached flour but you’d be spending ages cultivating a tiny number of surviving yeasties that got past the bleaching and commercial processing to a level high enough to start a real culture.

So your living location has nothing to do with your sourdough culture, it’s much, much more related to where your flour was originally grown and how it was processed.

Sadly, then, the answer is no, you don’t “catch” or “capture” wild yeast, it’s already in your flour. But you do cultivate it!

I’ve seen recipes that say to use sourdough starter AND some regular yeast together. Can I do that?

Sure! But then you’re not making “real” sourdough bread. And there’s nothing bad or wrong about that. A sourdough purist will lament the use of commercial yeast and insist that to be a true sourdough bread, no such yeast should ever be added. However, some recipes use the addition of commercial yeasts to speed up the rising process since plain sourdough doughs do take a fair amount of time to rise and develop it’s flavours, sometimes 16 or more hours.

One such person is (was) Professor Raymond Calvel, one of the – and arguably “THE” – topmost authorities on bread and sourdough breads. Even he recommended adding yeast to some sourdough recipes, although it should be pointed out that he dealt primarily with commercial French bakeries and the use of instant yeast was to assist in commercial production. And in that environment, using commercial yeast makes sense.

Unlike a home baker, commercial producers, even smaller ones, are bound to schedules. As such, they need to have their doughs ready at specific times in order that the boules go into the oven as soon as the bagettes come out. In this environment, timing is very important. A home baker, on the other hand, doesn’t need to worry so much about what’s in the oven when, so as long as you know your bread will be ready to go in the oven in four or 16 hours, and you can be around to pop it in and take it out, how much time it takes to rise will depend more on what you’re wanting the loaf to be like.

Fast rises make for much less tangy breads since the bacteria, which give off the acids that people associate with “sour” dough, simply don’t have enough time to produce the levels you might want. Slow rising, on the other hand, helps produce the flavours in the sourdough both from that bacterial activity and simply the extra flavour development in the wheat and/or other flour over time. It really depends on how much of a rush you’re in. This is one reason “quick breads” may not have as developed a flavour as a longer process bread that evolves over two or three days might produce. 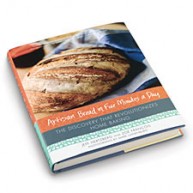 This doesn’t necessarily apply to the Artisan Bread in Five Minutes a Day style breads, however, since that process expects you to build up a stock of yeasted dough you keep refrigerated for numerous days. Although the process makes quick breads using that stock dough (quick and easy to put together at that point), the stock has been sitting and developing in the fridge for several days so in effect, it’s acting like a preferment and adds a lot of flavour to your “5 minute” breads. But because it uses commercial yeast, you’d still be missing out on the additional flavours imparted by a natural leaven. It’s a bit of a trade off.

If you’re normally hoping for quick results, sourdough is unlikely to be your “go to” bread. The process is slow and methodical and some people actually like that aspect of it. It gets away from the rush-rush-rush pace of modern life and slows things down to a more relaxing speed. Sourdough is an “anti-fast food” food; it’s a “slow food”.

All that said, there are also recipes that want regular yeast added simply because the recipe’s author just didn’t know any better. Not all recipes are created equal so look for recipes that come from sources that otherwise seem to know about sourdough and it’s process. Then you’ll be able to judge if the added yeast is logical or not or if you want to just keep looking for a pure sourdough bread elsewhere.

But don’t discount sourdough even if your free time isn’t exactly abundant. The vast majority of the time needed to make sourdough is really just in it’s resting phases. You don’t need to be around it during that time and you can likely get your dough ready one day, let it do it’s 16 hr rest overnight and next day while you’re at work and be able to get it into the oven later that night. Yes, it’s a longer process, but most of it can happen without you there.

Unless you luck out and get a delivery from a bakery that actually takes the time and bother to make real sourdough, chances are that the “San Francisco Style” bread you’re buying is really all (or mostly all) commercial yeast-based. The “tang” you’re getting comes from the addition of acetic acid and flavouring, not from slow fermenting of the dough. Without these additions, you may be getting just a regular, commercial yeasted bread. That doesn’t mean it’s not good bread or will taste bad, it’s just not actual sourdough, even if we expect that definition to mean typical San Fran “tangy” sourdough.

It’s like saying flavoured fruit drinks are the same as real fruit juice. Even if they used the very very very best flavouring, and it tasted exactly like the original, it’s not really juice. It’s flavoured sugar water with possibly added vitamins that mimic real juice. It’s still wet and probably still tastes ok, but it’s not actually juice.