Our second Italian bread in The Bread Baker’s Apprentice, Pane Siciliano is recipe #23 in the BBA Challenge. New in the process is the use of semolina flour, a flour made of durum wheat which is often used in making pasta. It is a slightly gritty flour and has that distinct yellow cast to it you can see in your standard spaghetti and which adds not just colour but extra aroma and flavour, says Mr Reinhart. This is an enriched bread, having the addition of a little olive oil and honey.

I’m looking forward to the final product to see how this works out.

Once again, we use a Pâte Fermentée as part of the ingredients. 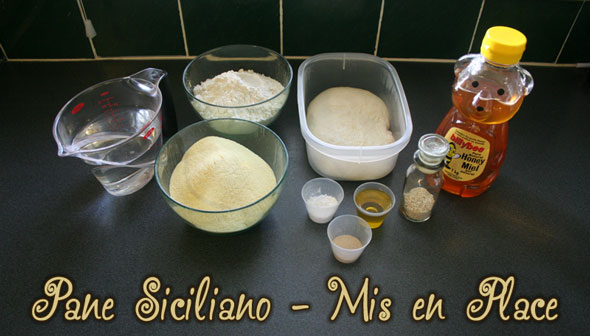 What we have here: water (90-100ºF), bread flour and semolina flour, our prepared Pâte Fermentée, salt, instant yeast, olive oil, honey (I’ll pour that into the oil cup to make pouring out easier) and sesame seed for final topping. Once the Pâte Fermentée has warmed up in about an hour, we’ll be ready to go (I’ll make sure to use warm water then).

First step is to mix up the dry ingredients, then we add the oil and honey, finally adding the now warmed pâte and 1 1/4 c of the water (we hold back the last 1/4 cup for adjustment if needed). 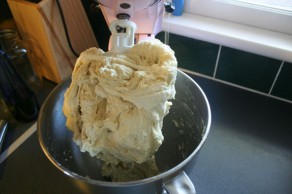 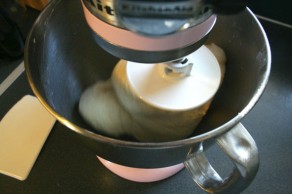 This is then mixed with the paddle tool until the dough forms a rough ball. There was no need for any extra water as all the flour absorbed into the dough ball easily.

We then switch off to the dough hook and knead for about 6 to 8 minutes (10 minutes if done by hand) until the dough is supple and no longer sticky. The dough had reached required temp and was able to achieve windowpane. 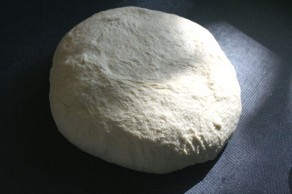 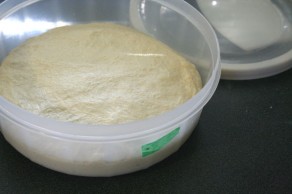 At the end of the 6 minutes, I turned out the kneaded dough but found it just a little too sticky still, so I kneaded it by hand another minute or so, adding a sprinkling of flour, probably no more than a tablespoon of extra bread flour.

The dough is then placed into a oiled container, covered, the volume noted and left to double at room temp for about 2 hours. Because our kitchen has been a bit on the cool side of late, I expect it will be a little more than the 2 hours suggested. 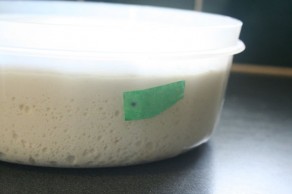 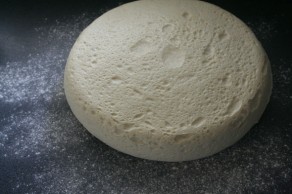 Once the dough had finally doubled, about 2:45 hours later, the ball is turned out onto a lightly floured counter where it is then divided into 3 similar pieces. The ball ended up weighing about 1270 grams, so each piece was made about 420-ish. 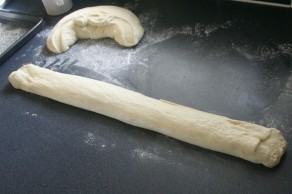 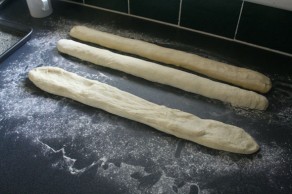 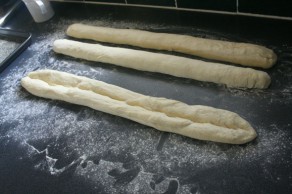 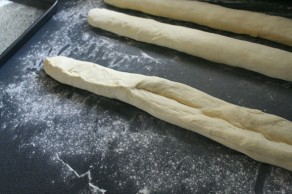 With gentle handling so as to not degass the chunks of dough more than needed, each piece is stretched carefully to about 24″ (60 cm) then formed into a baguette. First, it is flattened slightly, then an indent is made in the center and the dough is then folded over along the dent and the edge is sealed. A quick, gentle roll is done to round up the shape and our baguette shape is done. 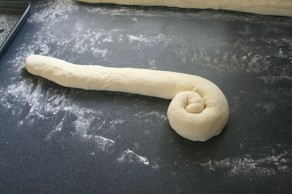 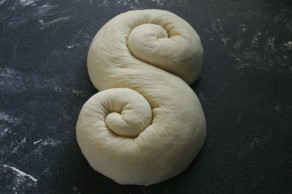 One end of the baguette is then curled, the other is curled the other way until you have the desired “S” shape. Once all three loaves are shaped, they are placed on a parchment sheet (I’m reusing one from the last bake) sprinkled with a little semolina. And now we have… 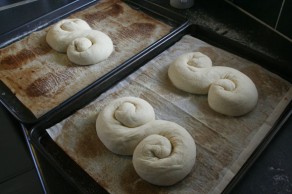 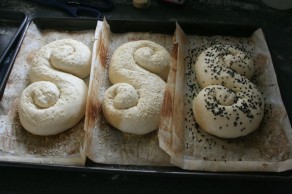 Because these loaves are going to double in size, I want to give them plenty of space on the sheet and there’s no problem baking two sheets at once. However, there is definitely a problem refrigerating two sheets – there simply isn’t enough room in the refrigerator for that. So the solution: Slice the parchment so each loaf has lots of spare space and place them all on one pan with the extra parchment making a sort of “wall” between the bread; if they do expand and begin to press together, they won’t stick to each other (we hope)  and I can still separate them and put the middle one on it’s own sheet when they get baked tomorrow.

Next, a quick spray of water and sprinkling of sesame seed. I decided to use some black sesame seeds for the last one, just because I can.

These loaves are then sprayed with a little oil spray, loosely covered with cling film so they can expand, then the whole thing got popped into a garbage bag (to avoid any drying problems) and tucked into the refrigerator until tomorrow.

So now we wait one sleep… 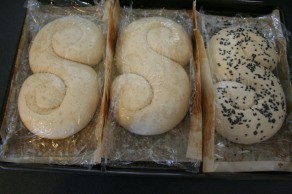 And here we are the next day after allowing the dough to warm up. Hmmm… I can’t really tell, is that “doubled”? It looks decidedly larger… It had about 2 hours sitting on the counter. Well,off it goes into the oven at 500º, with steam, then reduced to 450º and baked for about 30-35 minutes. 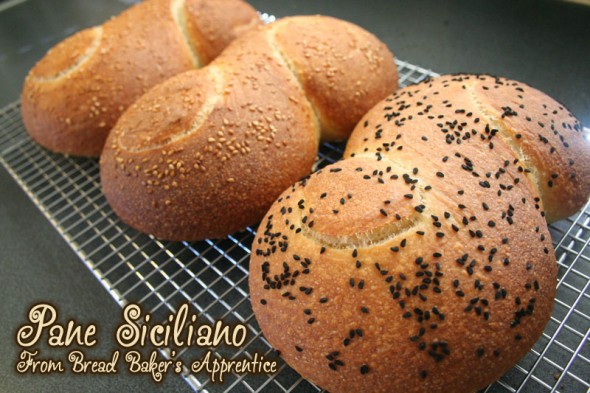 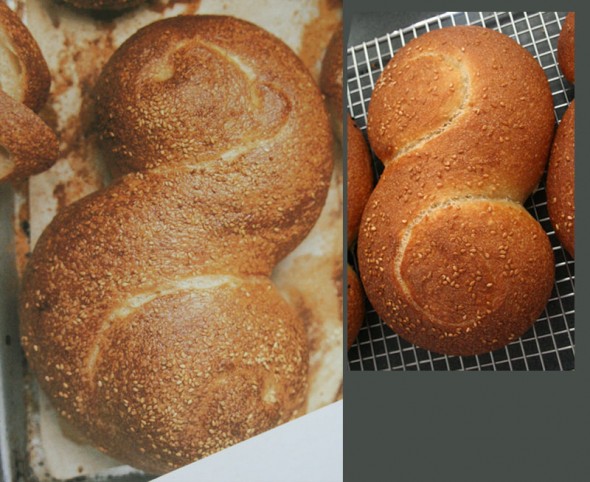 I compare the photos of the bread in the book vs the bread that just came out of the oven and, unless Peter Reinhart uses considerably much smaller sesame seeds, my bread is seriously undersized. Here’s a comparison pic where the sesame seeds are made about the same size and it sure seems like the book’s bread is much, much bigger.

I had hoped there would be plenty of oven spring when they went in and they did get a little bigger but clearly they’ve missed the mark. So this is yet another bread that didn’t seem to increase in size as expected. I think I seriously need to consider the yeast, perhaps build some sort of proofing box so the kitchen temp doesn’t affect the proofing too much.

OK, let’s have a look at the crumb… 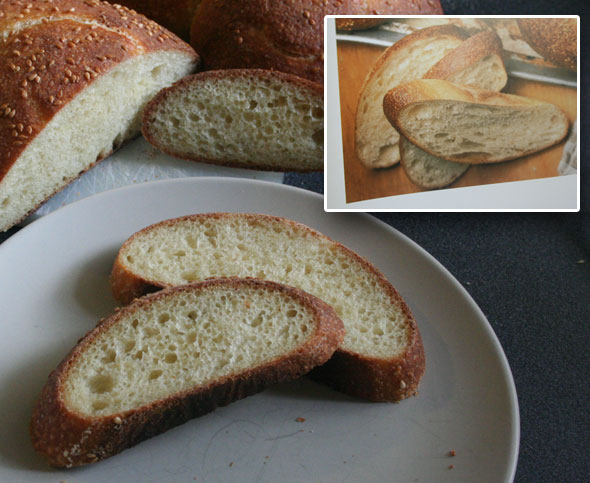 As I cut the bread, the aroma was quite wonderful. The crumb is tighter than the one shown in the book’s photo (inset). The size of these slices is on the diminutive side, obviously something in the proofing failed. The taste is very nice, the crust (fresh from the oven) is crispy and not too thick or thin. Once it’s been bagged for a day or so, I think it will retain good flavour even if it loses the crunch.

Over all, a nice, middle of the road bread, neither too “artisan” crusty nor too “sliced white” soft and flavourless. Well, definitely not that, actually. This goes into the “Do again” pile but we’ll pay more attention to the proofing. We have three somewhat small loaves to get through for now and they do look pretty.

Side note: I suspect the loaves in the book were hit with some form of glaze, they’re much shinier than the ones on the counter.

Next up: Panetone. Gotta go hunt up some dried fruit.