And here we are at the first of several Sourdough Rye breads in The Bread Baker’s Apprentice, bread number 31 of the BBA Challenge.

This one seems intriguing as it’s not simply a rye bread, not even a rye and caraway bread but a rye, caraway and onion bread. The pressure on this one coming out well is high as I was a little disappointd in the previous Basic Sourdough. That was a good brad but didn’t really fare well compared to the Hamelman Vermont Sourdough. So this New York Deli Rye had  to pick up the batton and go the distance. Did it? Let’s see…

Before we do the normal Mis en Place, I mixed up what Reinhart called a “stiff starter” and for this bread, that meant a rye starter made into a pre-ferment. So first thing was to build a rye starter from my normal unbleached white wheat starter. According to the recipe this would require 7 oz (about a cup) of the rye starter. So on the day before I fed the new starter with rye flour and waited for it to double which it did in about 4 hours, as shown at left.

Then I realized that the recipe I was about to make was enough for two 2-pound loaves or three 1.5 pound loaves, way more than I can get through in a week. So from this point, I just halved all the ingredient quantities and would aim for two 1-pound loaves. 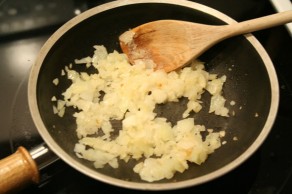 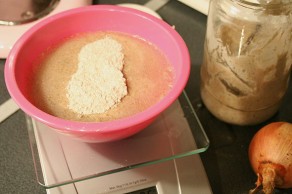 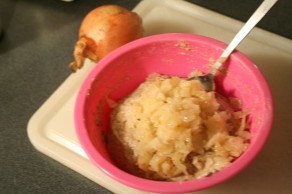 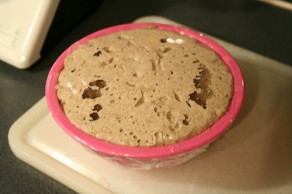 The next step was to cook up a diced onion and, once cooled, add it to (now just half) the rye “mother” along with more rye flour and water. This would then sit in a covered bowl until bubbly and foamy then go into the fridge overnight.

The next day, the foamy “stiff starter” is pulled from the fridge and allowed to warm up for one hour. 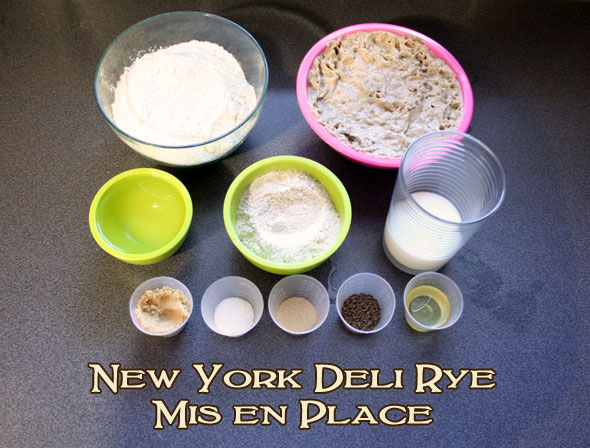 In this bread we’ll be mixing: bread flour, the stiff starter (rye sourdough + onions), and more rye flour. Note that the recipe calls for “white rye flour” which I’ve never seen for sale anywhere around here, so I’m going ahead and using the dark rye I have on hand. From what I can find, the difference is that the white right is lighter in both colour and flavour but the gluten aspect is the same: not much.

We also have on hand about a half cup of water (use as required), buttermilk and, in the little bowls, brown sugar, salt, instant yeast, caraway seed and veg oil. Again, all these amounts are half of the quantities listed in the recipe.

These next steps are pretty basic: mix dry ingredients, add liquids and mix with paddle until a rough ball forms. I only used about 1/4 cup of the water to get everything to come together. This is then allowed to sit for 5 minutes to rest. I thought this was a rather short autolyse period but it seems Reinhart doesn’t give his bread much autolyse time. 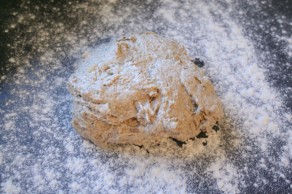 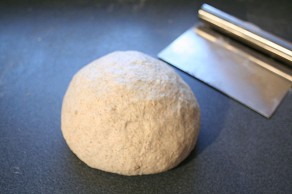 The dough is then turned out onto the floured countertop for kneading. You can use the dough hook and knead for about 4 minutes on medium low speed – I chose to knead by hand for six minutes instead. The dough was just a little tacky-gummy, being rye. At this point it was windowpaning pretty good. I also weighed the dough ball here and I was at 29.5 oz.

The dough is placed into an oiled bowl, covered and allowed to bulk proof until doubled, about 90 to 120 minutes. We got there at about 100 minutes. The dough is then turned out and divided, in this case into pieces of 14-15 oz each. 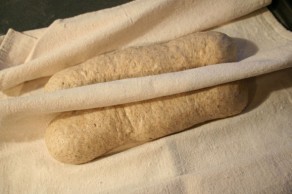 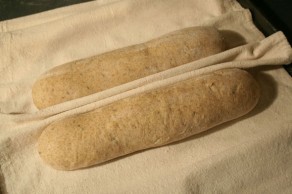 The dough is shaped; here I’ve chosen to make two batards. The loaves are put into the floured couche and allowed to rise until about 1.5 times the original size as seen on the right. This took a full 90 minutes. At the 60 minute mark, I preheated the oven set at 400ºF.

Looking at these dough shapes, even after proofing, I was concerened that my decision to make two small 15 oz loaves would not be a good one, and that I would have been better off making one 30 oz loaf. We’ll see if this was really an issue later on and if the oven spring would help them out. 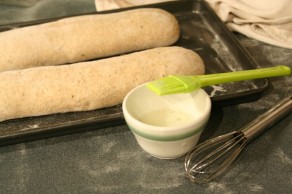 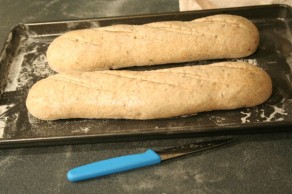 The proofed loaves are then transferred to the baking sheet and given a glaze of slightly whisked up egg white, which I just happen to have leftover from making lemon meringue pie the day before.

The loaves are finally slashed and go into the preheated 400ºF oven for 20 minutes, given a 180º spin to even the cooking, then bake for an additional 15-20 minutes. I checked them at about the 15 minute mark of the second part and they had already reached 203º internal so they came out, looking like this… 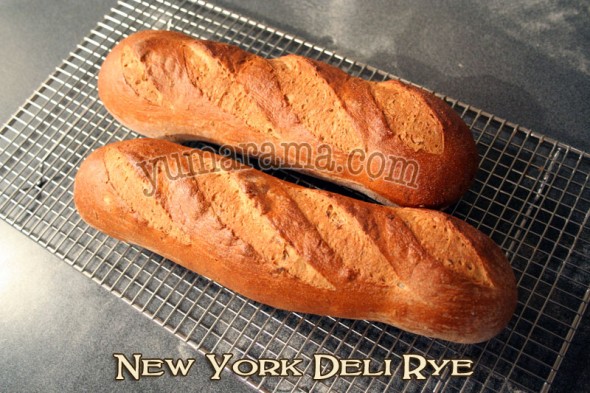 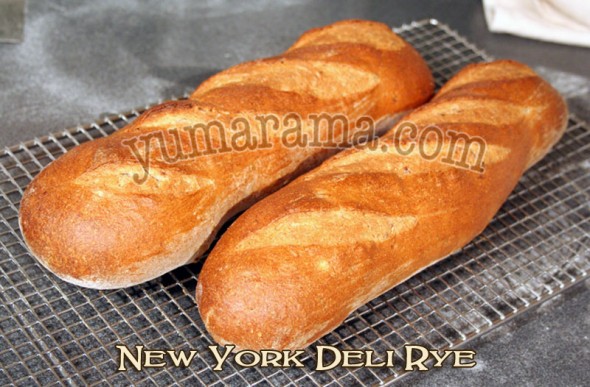 They looked lovely, although still a bit small so yes, I’d make a single larger loaf next time. But the slashes were good, got some “gringe” action in there, the colour was a good, deep golden brown and the smell was lovely, the onion giving just a nice undertone and not too overbearing.

The bread was allowed to cool for an hour and I was finally able to to slice it and check out the crumb and colour, a point of interest since I had used dark rye instead of white rye flour. 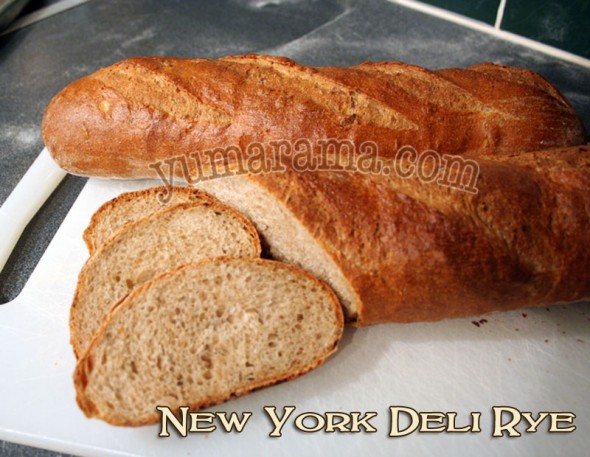 Sorry, looks like it’s a bit out of focus. But the interior is still relatively light considering the flour, the crumb is even and somewhat small, as rye tends to be. The taste is very nice indeed, the onion and caraway are somewhat more subtle than I would have expected but still give a distinct hit. Since the rye flavour is still pretty subtle even though I used the bolder dark rye flour, I would imagine it would be REALLY thin had I used white rye. This is still only a 45% rye loaf so it’s primarily normal bread flour.

The crust is crispy but light, at this point. It will of course change once the bread has to go into a plastic bag. But I think even Punkin, who dislikes crunchy crusts, might approve of this, if he weren’t away on a business trip.

So yes, this rye bread is very good and makes up for the less exciting Basic Sourdough of last month. Other than the size issue – which was fully of my doing – I don’t see anything off about any of the process or the final product. We’ll see if the flavours intensify in the next day or so as sourdough usually does but I’d call this one a roaring success. I’ll have to pick up some corned beef or pastrami, likely some of both, on the way home tomorrow and give this a real Deli Sandwich test.

Next up: 100% Sourdough Rye. I guess we’ll be dropping the use of instant yeast and rely entirely on the starter…

This bread was submitted to YeastSpotting. Check it out for great breads each week!

Others baking this bread:

Oggie of I Can Do That gave this one a top score all around.
SallyBR at  Bewitching Kitchen called it “awsome!”
Anne Marie of Rosemary & Garlic felt it was rather weak in rye taste (I gather she used white rye flour).
AP269 of Food and Family was pleasantly surprised that her kids LOVED it.