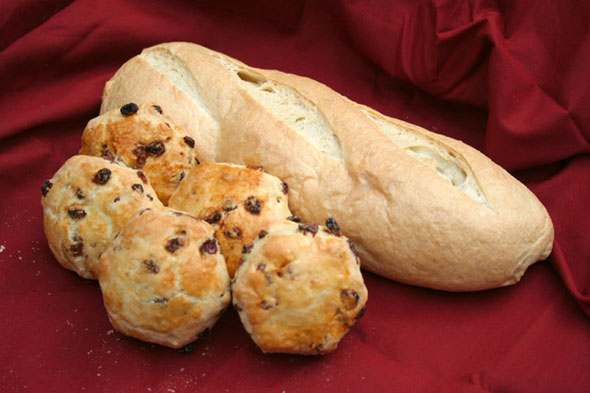 Finally! Yes, it’s finally Aug 29th and day one of baking class at the CIVI* begin for my 2011-2012 session. I’ve been looking forward to this day with great excitement for a while now and it’s really, actually here.

* What is CIVI? The official name for the baking end of VIU is actually “The Culinary Institute of Vancouver Island” Pretty fancy, eh?

Being that the first couple of days are mostly orientation, we spend the majority of days one and two just going through the basic inauguration into the University: After introductions from our teachers, Mr Martin Barnett and Chef Ken Harper, we meet a few of the important people in the bureaucratic background, taken for a quick tour of the corners we’ll haunt, such as the Food Lab, got our Student Cards, hit up the bookstore to spend more money, etc.. Wednesday we had off (but lots of reading homework) due to the Uni having a “pre-class” staff meeting. Since Pro Baking is starting almost 2 weeks early in order to be ready to pump out breakfast goodies when school officially opens, our teachers are taken away for that day.

At last, Thursday came along and we are now actually, really, ready to bake! Chef Ken let us know we were about to be broken up into small groups who would get the day’s ingredients in order, set the tables up, etc.. We finally got all the ingredients portioned out for all 35 of us, the tables set and the demo counter with the big angled mirror moved into place. We were now officially ready to bake.

No camera today so I’m afraid the next few bits are pictureless.

First on the list: French Bread, straight dough method. A small loaf, about 350 grams all told, consisting of hard flour, salt, sugar, shortening,yeast and water. Being straight dough, it all goes into the bowl and gets mixed, then kneaded, the latter probably being the main focus. We were shown “window pane” testing and then shaped the dough into balls and popped them into small containers. Off it went to proof.

Next: Scones, biscuit method. A quick bread as it requires no yeast and can be made and baked right away (although it can also be refrigerated). The focus for this recipe: cutting the fat. The goal here was to get the cold butter cut into 1 cm pieces (or near this) and once added to the flour mix, cut in until these were turned into “pea sized” lumps which would eventually give flaky texture.

We then rolled out the dough to about 2.5 cm and cut out 6 to 8 scones, placing them on a baking pan to be baked. Off they went.

After break, the French Bread dough came back from the proofer all huge and doubled and we then shaped it into loaves long enough to fit the baking pans. These went off for final proofing.

Now, Flaky Pie Dough. Extremely simple and uses the same idea as the scones: pea-sized globs of fat. In this case, we used pastry flour, shortening, cold water and salt. We cut the shortening in the flour until it was, again, pea sized. The salt does NOT go in the flour but is dissolved in the water. That is added next and the whole mixed lightly just until it can hold together – you don’t want to overwork the dough or melt the fats. Wrap and refrigerate for at least one hour before rolling. And away into the fridge went our little packets of dough.

When would you use one over the other? Flaky pie dough is not the ultimate style of dough for all occasions. It makes a great dough for drier pies or pie tops but the base for wetter pies should be Mealy Dough. What this means is, simply, you cut the fat until it is very very small ‘cornmeal sized’ particles which won’t make flakes. The recipe ingredients and process is otherwise identical in both types of dough. Why is Mealy better? Because when the flour is evenly merged with the fat, it is less prone to absorbing liquids so your pie won’t get a mushy bottom for things like fruit pies or custards. The dough will be soft and melt-in-your-mouth texture. Flaky dough, on the other hand, leaves much of the flour mixed only with water and the fat globs melt to create those eye-appealing flakes. But the flour-and-water-only parts become absorbent and will suck up moisture from the filling.

Last baking class of the day: Spelt Pizza Dough. Actually, it’s just 30% spelt, the rest is plain wheat flour. It also contains salt, yeast, olive oil and water. Here we focussed on a different mixing process, where we dumped the flour/salt/yeast dry mix on the counter, made a wide circle of it then poured in the water and oil. Then, taking just one finger, we swirled around the edges mixing the flour and liquid slowly until the center was pretty much a slurry. At that point, using our scrapers, we were able to finish incorporating the remaining flour and liquid into a solid dough mixture. A little kneading and we were done. We popped that back into the bowl we used all day and into the fridge it went overnight.

By then, the French Bread had proofed and Mr B quickly slashed all the loaves and popped them into the deck ovens (with steam) while we went off to the final bit of theory class. When that was done, we went to get our baked breads and scones. These we got to take home… where my camera was.

Now the review of the breads: Chef Harper himself noted that the scones had not risen as expected which means the recipe’s baking powder was likely off. Still, the texture was flaky due to the “pea sized” fat. Flavour-wise, I thought they could have done with a slight increase in salt. They tasted nice though.

Chef Harper has published his scones recipe used when he was Pastry Chef at the famed Fairmont Empress Hotel in Banff. I found a copy of it, or at least a photo of the recipe in a book which you can see here. I’ll bet it’s better than the simpler one we made. Chef Harper and Mr B made thousands of these each week when they worked there. These bake at 360°F until the tops are golden and the scones are set. The mixing process though is as described above.

The French bread… hmmm, well, it was OK. It’s soft crusted with a very even crumb. It didn’t get much time to develop flavours and is pretty plain bread. I do need to keep in mind these were just “get the process down” recipes for baking class, not necessarily “you just MUST try this bread!” recipes. I’m sure we’ll get to excellent bread recipes soon.

On to Fridays’ baking class: Apple Pie and Pizza.

We start out the day in the Food Lab which is  a large room with about 24 stations all facing the chef’s station, equipped with TV cameras and microphone. Here Chef Ken gave us a quick overview of the tools we’ll be using such as knives, palette knives, peelers, etc.. At the same time, he showed us how to slice our four Granny Smith apples for today’s pie. One of the points stressed was that you need to keep in mind you may be slicing apples for 2 dozen pies, so 4 X 24 = 96 apples; keeping the time each apple takes to peel as low as possible is truly important. His trick is to slice the top and bottom of the apple so you’re not peeling around curvy ends. If this shaves 8 seconds off peeling each apple, you’ve saved 768 seconds off the job, or about 13 minutes, that day. Do this 5 days a week and 4 weeks a month, you’ve saved 260 minutes or about 4.3 hours. Over a year: 51.6 hours. That’s a significant amount of time. Do the same for the numerous steps needed in the process and for all other tasks and you can save a HUGE amount of time.

Whether you work in a small bakery or a huge hotel’s kitchen, this principle is one well worth keeping in mind.

Once our apples were peeled and sliced, we headed back to the bakery to assemble the pies. We rolled out our very chilled dough and popped said dough into the pans. Then off they went back to the fridge. Out came the pizza dough and we were shown how to roll this out. And back that went to the proofer. Out came the pie shells once more where we filled them with the apple and sugar mixture we made, topped the pie and added some individual scoring. Away they went to be baked.

(Don’t you love that “away they went” and “then they came back”? That’s thanks to Angelique, the Bakery Fairie. She’s a sweetheart and can make most anything appear. Every home needs an Angelique, although they’re usually called “mom”.)

Back came the pizza (are we dizzy yet?), on went the toppings that had magically appeared, and off it all went to the deck ovens. Oh look, I brought my camera along today! (Click smaller pics to get a larger view.) 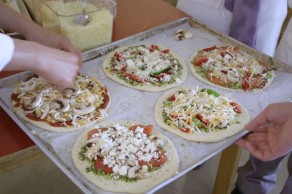 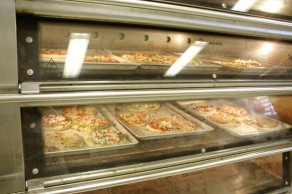 Time to clean up while lunch baked. 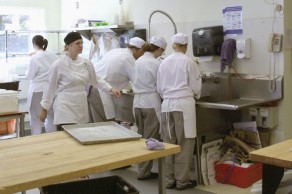 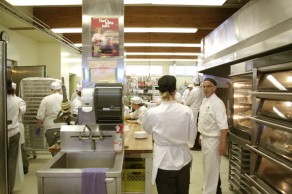 Our diligent crew tackles two days’ worth of plastic containers for 35 people. No small task! Once the pizzas were done, a hungry bunch chowed down. 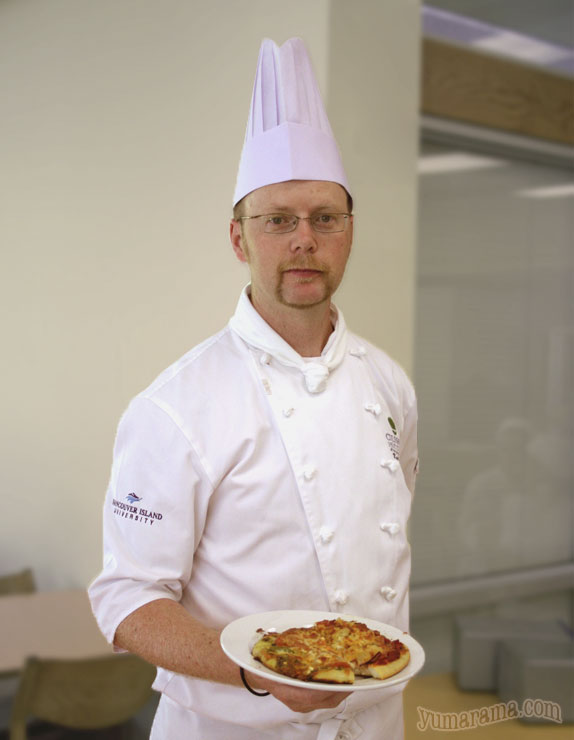 Obviously, there were lots of different pizas made; mine was pesto with tomato, mushroom and feta cheese. In the prep photo above, it’s the pizza closest to camera. Dee-licious! And not just due to the toppings; you’ll see there is a fair bit of bare dough left around the edges and I made a point of that so I could tase the bread alone. What a difference an overnight retardation does!

After lunch, a little more cleaning, some actual paperwork and finally, we got our pies. 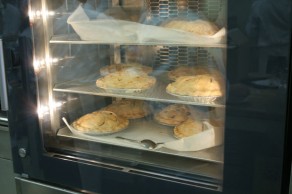 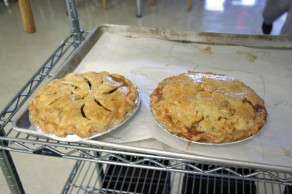 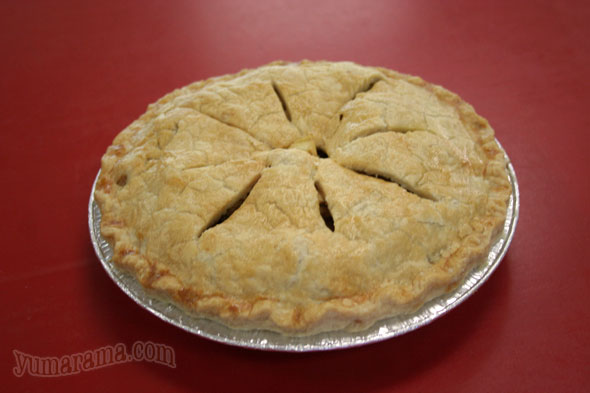 A pleasant (and delicious smelling) send-off before the long Labour Day weekend. We’ll be back Tuesday to start getting into serious production mode a little deeper.