As it looked like we were about to run out of bread (I gave away the remainder of the Focaccia to a neighbour) I decided to give a go at Reinhart’s version of the English Muffins (loaf style) after all to compare  it to the Mike Avery version I made a few days back.

The Bread Baker’s Apprentice recipe has slightly different ingredients; it requires buttermilk where Avery’s uses milk powder, Avery adds a tiny amount of baking soda which Reinhart does not  and of course the most obvious being that Avery’s uses about 2c of sourdough starter vs Reinhart’s 14g of instant yeast, albeit the sourdough version makes two loaves and the BBA makes just one so the Avery version would have an equivalent of about a cup of starter.

Will that still affect the flavour significantly? How do they compare? Let’s go through the process and see… 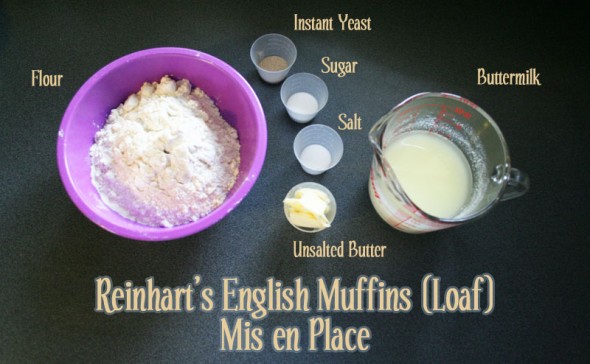 Here’s what we’ll be using. 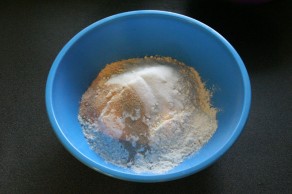 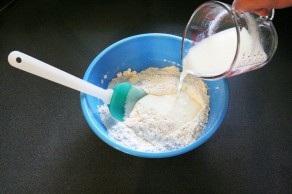 Stir dry ingredients together, add 3/4 of the full cup of buttermilk and the butter 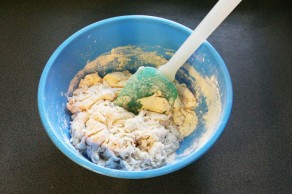 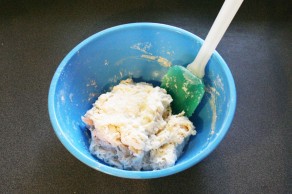 Stir ingredients, if they don’t fully mix and there’s still dry flour, add some or all of the remaining 1/4c of buttermilk. It was dry so I did.

Turn rough dough out onto the floured counter and begin kneading, adding flour as you go to make the dough tacky but not sticky. The middle picture is at the two-minute mark, the third is at the 10 minute mark. Here the dough passed the windowpane test (not shown because of lack of third hand).

This dough starts out quite sticky and gloms onto your hands pretty good at the beginning but rather quickly gets its act together, picks up the extra flour and becomes a clean ball to work with and no longer gums up your hands. By the end, it is still pretty soft and still just a little tacky without sticking to your hand or the counter. I may have added maybe three extra tablespoons of flour in the process: what you see sprinkled on the counter plus a couple more dashes as I went along. 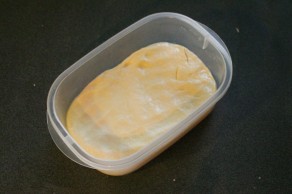 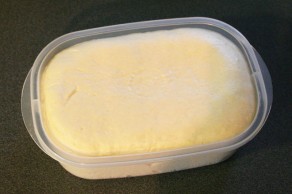 The dough is then put into a greased bowl, flipped to coat then covered and left to rise about 60-90 minutes until doubled. In this case, the dough doubled (and a little bit more) within the 60 minutes.

TIP: When letting your dough rise, the TIME given is just a guide. The dough does not wear a watch and has no idea where it should be by any given point. So gauge when the dough is ready by how IT behaves, not what the clock says. The same recipe may take more or less time because of various factors, such as ingredient freshness or room temperature. Let the DOUGH tell you when it’s ready for the next step. 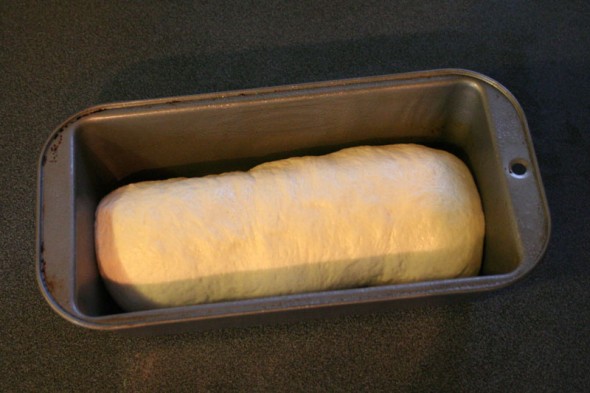 I gently degassed the dough a little as I turned it out on the counter, softly pushing it into a rectangle that i then rolled and formed into a log just big enough for the sprayed baking pan (4.5″ X 8.5″). The dough is then sprayed with oil, covered and allowed to rise until doubled again and cresting over the pan. Again, this should take 60-90 minutes. 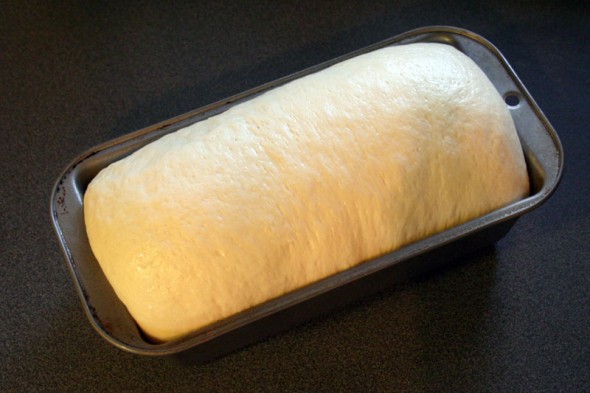 Because the kitchen was quite warm, this took about 50 minutes. At the 40 minute mark, I preheated the oven to 350ºF. Once the oven was ready, I popped the pan in and let it go for 15 minutes of the expected 30 at which point I gave it a 180º spin. Another 15 minutes and the bread was a lovely colour, had very nice oven spring and the internal temp was ~197ºF so and I pulled it out. 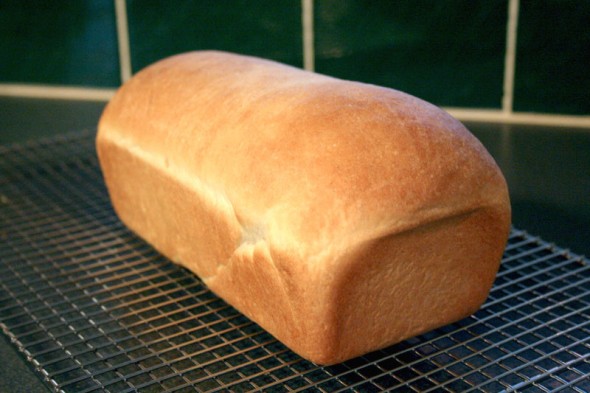 And there’s our load un-panned and cooling. Visually, it’s better than the previous loaves, but largely, I suspect, because this time I used a proper sized pan; the others were in bigger pans so they didn’t fill or crest as well.

Now we let the bread cool for about 20 minutes and can cut in to see the crumb, take a dramatic shot then taste. 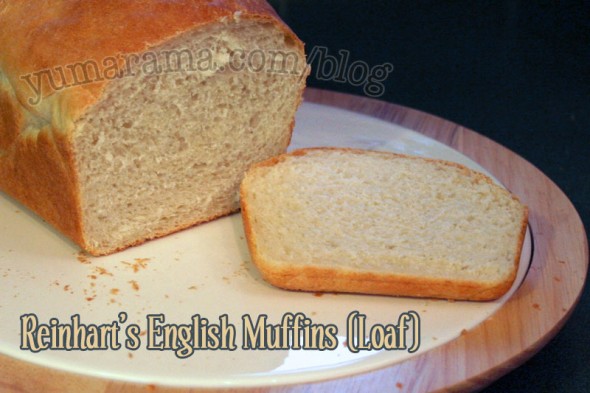 The crumb is tender and the holes are fine and evenly distributed. Let’s pull up the other loaf and see how that came out in comparison: 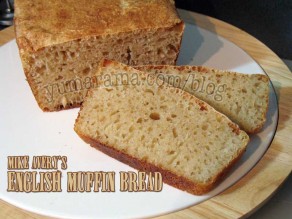 Click to enlarge. You’ll note the crumb in the other loaf is a little coarser, there are slightly larger holes. That crumb was also less “fluffy” and had a little bounce when touched where the BBA version here is very soft and would stay indented if poked.

I’ll just say right out, this is a very disappointing loaf. And I doubt making it into individual muffins would have made much difference. The texture is too soft, the flavour is… lackluster. There’s not a whole lot to this BBA version that shouts out “English muffin” where the Avery version was unmistakably hitting the mark.

As far as actually making the two types, assuming you have sourdough starter, neither is easier or harder than the other so there’s no clear advantage to either in that department.

This BBA version makes a nice sandwich loaf but it is not a good English Muffin recipe. Sorry, Peter. For that, I’ll stick to the Mike Avery sourdough version. Perhaps there’s even another commercial yeast version that’s pretty good out there. This, however, isn’t it. Again, I want to state it’s not a BAD tasting bread, in fact it’s a rather nice bread and will be great for toast in the morning. But it’s just not a contender to beat out even store bough English Muffins.

Sadly, this recipe goes into the “Won’t be doing this one again” pile. It’s a very small pile, mind you.

The sourdough version, however, will be made again. Get the loaf recipe here and the single muffins recipe here