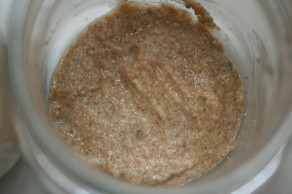 Does the thought of starting your own Sourdough Starter from scratch make you break out in cold sweat? Don’t let it because it’s EASY!

Looking at the blog’s stats, there’s a constant stream of people who pop in here searching “sourdough starter” and it is becoming apparent that it may be helpful for me to finally get one written up.

Instead of starting an experiment “from scratch” and sort of poking my way around the technique and making a lot of guesses, good or bad, in the process, I figured it would be more logical to take a very well researched and detailed account and simply follow along, giving an illustrated account of what’s happening in my kitchen.

After doing a fair bit of searching, I have chosen to follow a formula designed by Debra Wink who is not only an excellent home baker but also a trained microbiologist. The combination of interests seems to me the best source of information to get both the “what’s actually going on in that paste” and “this makes great bread”.

The formula that she created, with help from a number of other sourdough enthusiasts, follows this basic philosophy:

A simple flour and water paste can be made into a sourdough starter but offers a good environment for much more than the specific strain of yeast and bacteria we desire; these other organisms can impede the growth of our “friendly” critters and make the actual development of a viable starter take much longer than it needs be.

Primarily, the formula introduces an acid, in the form of pineapple juice, which immediately lowers the pH of the flour paste to levels appreciated by the yeast and lactobacilli, the two friendly critters we want to cultivate. This jump starts their development – although the yeast will likely not awaken for several days yet – and get you to the end product you want much faster by skipping the confusing 1st stage growth of other bacteria, the foul smells and other distractions you might see in a plain flour-and-water medium.

For a VASTLY more in-depth description of “what the heck is really going on in there”, I’d suggest you take some time to read Debra’s blog posts on TheFreshLoaf, located here (part 1) and here (part 2). Be sure to also read the comments/Q&A under these posts as much more info and FAQs you might be wondering about are addressed there.

For this project I’m following the instructions in Debra Wink’s post over on TheFreshLoaf com . Please make sure to read it and even print out a copy so you can follow along. I’ll also build two versions of the starter at once: one with juice and one with plain water, side by side, to make comparison easier.

I also thought a Starter Step-by-Step would be helpful for those people taking part in the Bread Bakers’s Apprentice Challenge (who don’t already have a starter going) to have at hand  as we near the Sourdough section (albeit that’s not due until December). Because you do want to give your starter some time to mature, it may be a good idea to fire this puppy up at least a month or two ahead. And it also gives you a starter to play with and make great bread, even before you get to the Sourdough recipes in BBA. Although Reinhart has instructions in the BBA for starting a starter (which he incorrectly calls “barm”) there have been problems reported with those instructions. This is, in part, what prompted Debra Wink to do research noted above.

But what we have here is, it turns out, straight forward and simple to follow. Let’s get started, shall we?

I’ll include the specific bits I’m following from Debra’s instructions as we go, that will be the RED TEXT while my own running commentary will be in regular text style. I will also split this up into separate pages for each day so it’s not too gigantic a post.

Day One: Getting it Together
Day Two: Mid-day Surprise
Day Three :  Trading Places
Day Four: Going on a New Diet
Day Five: Waking Up
Day Six: Breakfast of Champions
Day Seven: The kids are all growed up
Starting a Starter: Final Thoughts

Want to point friends to this Starter info? Copy this easy-to-remember short link back to this tutorial:
http://bit.ly/StarterFromScratch