One of the breads that came up in the June list for MellowBakers.com was the Hamelman Vermont Sourdough, a bread I’ve made before a number of times and posted about here several tries on the blog.

Since we’re supposed to be “Mellow” bakers, we can choose which, if any, of the three varieties we will make. I decided: all three. Since I’ve done the straight up VS already, I wanted to give the other two types a go and see how they compared.

This still leaves two other breads for June: Pizza and Beer bread. I’ll try to get to those in the next few weeks. But let’s have a look at the Vermont Trilogy for now.

END_OF_DOCUMENT_TOKEN_TO_BE_REPLACED

Here we are at bread No. 34 in The Bread Baker’s Apprentice, Sourdough Pumpernickel. The header image is the same as the prevous entry since it features both the lighter New York Deli and the Pumpernickel breads. These are what we should be hoping to see once we’re done baking.

This was a pretty simple bread, all in all, nothing terribly tricky or fancy to do, the most unusual thing here is the use of cocoa powder to boost the dark colour of the bread. Otherwise, there’s nothing in the process we haven’t already done many times. So let’s have a go at this 10th-to-last recipe in this BBA Challenge.

END_OF_DOCUMENT_TOKEN_TO_BE_REPLACED

And here we are at the first of several Sourdough Rye breads in The Bread Baker’s Apprentice, bread number 31 of the BBA Challenge.

This one seems intriguing as it’s not simply a rye bread, not even a rye and caraway bread but a rye, caraway and onion bread. The pressure on this one coming out well is high as I was a little disappointd in the previous Basic Sourdough. That was a good brad but didn’t really fare well compared to the Hamelman Vermont Sourdough. So this New York Deli Rye had  to pick up the batton and go the distance. Did it? Let’s see…

END_OF_DOCUMENT_TOKEN_TO_BE_REPLACED

I made and photographed this bread around Dec 10th but it’s now Jan 23rd so I’ve held off posting for well over a month. Why? A few reasons: Holiday season, other breads wanting to get made, getting a wee bit “done” with the challenge, among others. But now it’s time to try and get back into the groove, especially since we’re now into the Sourdough section of The Bread Baker’s Apprentice which I was probably most excited to get to during this Challenge. So yes, this is really an “old” post that I’m simply finally getting around to writing up.

Hopefully, I’ll be able to get around to the next several breads in the Sourdough section in a more timely fashion.

So let’s get this show on the road then.

END_OF_DOCUMENT_TOKEN_TO_BE_REPLACED 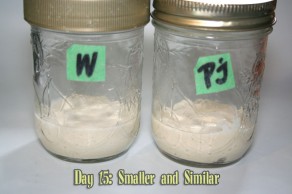 It has been eight days since this Step-by-Step Starter from Scratch project was posted on Day Seven and here is where the boys stand right now.

After about 5 days of twice a day feeding at 15g:30g:30g [S:W:F] for a total of 75g, I’ve reduced them further and they are now at 10g:20g:20g, a total starter size of 50g. Although this amount may seem small, it would actually allow, from the excess, 30g of starter which is all that the Vermont Sourdough recipe needs, still leaving 10g more of extra starter. So this is still plenty and means there’s less flour needed or discarded. Any recipe that required more starter would simply need that 40g of “excess” built up to the necessary amount a day or so prior to baking. That 40g can immediately be built up to 200g in just one feed using 40g:80g:80g.