Today’s bake was, again, from The Bread Baker’s Apprentice. As I had about 9 ounces leftover of the biga used in the Potato Rosemary bread, I decided to use it up for another loaf before it’s three days expiry ran out. Looking through the BBA, I saw a recipe that I could use it up with and decided on Italian Bread. I also saw that it was one of the doughs you could use for Grissini, Cool, two breads in one shot! So I made up a batch.

Once more, this was strictly following the recipe being my first time through. Made up the dough which was enough for two loaves, however, I made only one into a batard shape and the rest I rolled out and cut into breadsticks. By now, you’re probably pretty familiar with what a normal bread dough looks like so I’ll spare you that bit, but here’s the breadsticks, waiting for the loaf to come out of the oven so they could go in for a bake. 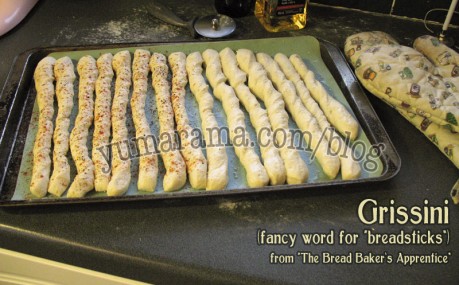 I simply took the dough and rolled it out to a size about as wide as the pan, then using a pizza wheel, cut small strips about 2cm wide. I rolled them up a little so they wouldn’t look like small planks, spread them on the sheet and sprinkled a mix of coarse black pepper, paprika and a little garlic powder on half, sesame seed on the other then a little coarse salt over the lot. END_OF_DOCUMENT_TOKEN_TO_BE_REPLACED

Not a whole lot to discuss on this one other than to say I’ve been wanting to make these for quite a while but never had the brainpower to make extra mashed potatoes. At least until recently.

This is from a recipe in Peter Reinhart’s The Bread Baker’s Apprentice and I didn’t make any changes to the recipe, being the first try at it.

Well, ok, one or two very minor changes: he asks for fresh rosemary, I only had dried which I soaked for an hour while the dough was warming up. He says to mix in roasted garlic – didn’t have any. I guess next time I’ll have to make that ahead of time along with the extra mash.

Anyway… here’s the final product, first try (slashed a bit too deep) and the loaves are still cooling so I haven’t cut or tasted yet but boy-oh-boy, does the house ever smell wonnnnnnderful!!