Well, I’m not going to fuss over where the First Batch messed up, just put this in the “trial run” pile and not admit to making a “real” loaf yet.

So now I’m working up a batch of SF Sourdough from Mike’s website now and it’s already much nicer to work with. Sadly, it’s not given in grams, either. But I KNOW what he assumes his cups to be (120g) so that’s a plus.

So I think THIS will be the “official” first run.

Well, the loaves are now out of the oven and here’s the results… 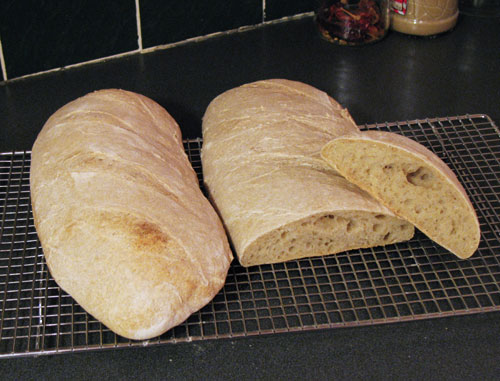 They are definitely softer (less seriously “chewy” crust, one hopes) and bigger than the previous attempt. Still rather pale and anemic, however.

I had big problems getting them onto the peel (chunk o’ cardboard) as they had stuck quite well to the cotton cloth I had them covered with, even though it was VERY liberally coated in UAP flour. The moisture from the dough obviously got drawn into the cotton and made glue, removing it caused mucho damage to the loaves’ skin and one definitely lost all it’s lovely, long time built inflation. So I have a sort-of good loaf and another flattish loaf.

This time though, I know where the problem originated – the final proofing step – and can remedy that next time by using parchment paper to rise them on and not need to move them off anything. Perhaps put them under an inverted plastic tub instead of laying a cloth on top so there’s plenty of room for them to increase without contacting anything.

The crumb is a lot less dense than the previous loaf, the crust is decidedly less thick and chewy.

There you go, attempt #2 and not exactly awesome. We’ll see what round three does.