Made another batch today, still with the same recipe (except halved, didn’t need to burn FOUR loaves again) and this time set the oven to around 425 – recipe wants 475 then turned down to 450 once the loaves are in.

Well, even at 425 and reducing to 400, I’m getting some spotty burning as you can see here: 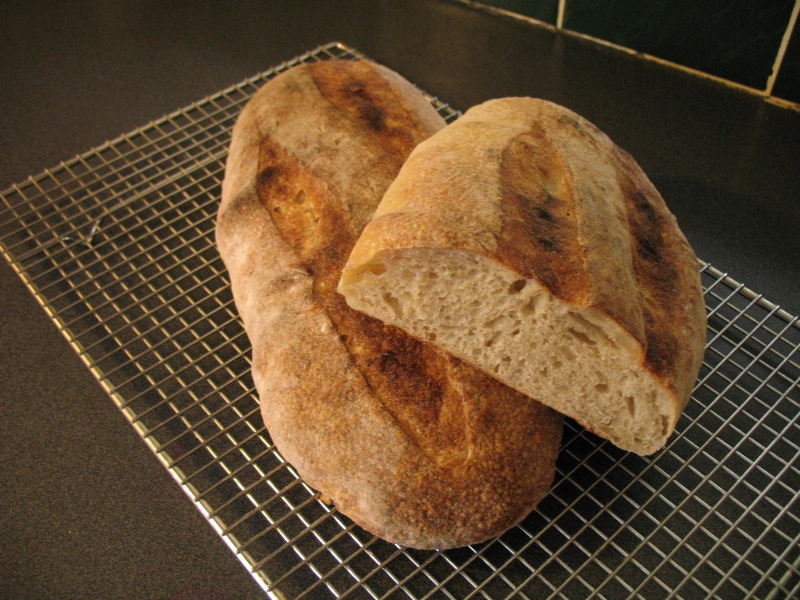 I think part of the problem is this rack was set at the 2nd level down so a little too close to the top where it was likely a bit hotter. Next time I’ll put it right smack in the middle slot.

The loaves are at least getting to the golden stage without turning near black like the last batch did. And the burned spots here are also where the bread had big pockets so these areas had a very thin bit of dough. Not sure how to fix that other than possibly finding out how to shape the dough better and try to not trap air pockets near the surface.

Now other than the oven temp yet needing to be confirmed and hopefully adjusted, I am still having issues with shaping/rising and getting the loaves to bulk up instead of out. And trying to proof them in a way that getting them out of [whatever, couche, banneton] and into the oven doesn’t cause major deflating. So rice flour is on the shopping list.

All in all, still a work in progress to get a first non-problematic sourdough loaf out.