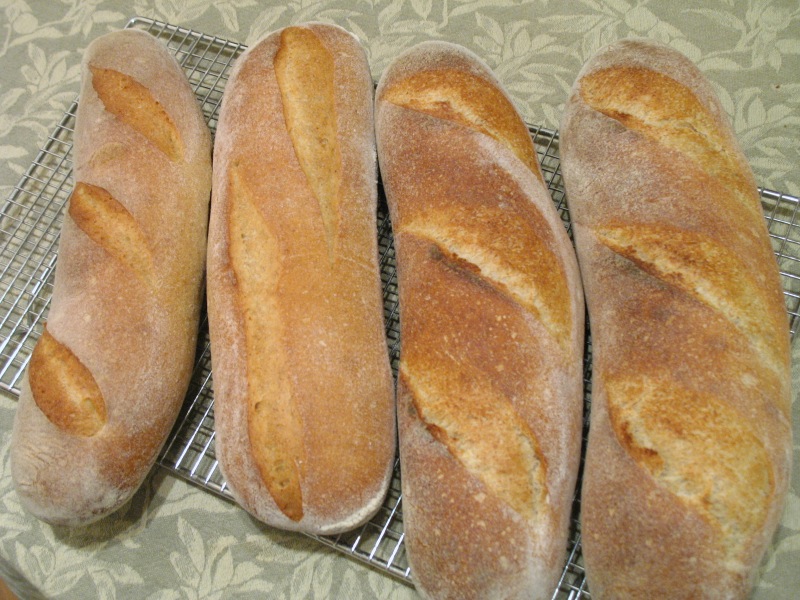 Well, doggone. It’s actually possible to get not too bad loaves made after all!

So this time around: double (or full) recipe, still working with Susan’s Norwich Sourdough from the Wild Yeast Blog since we know it works and don’t want to introduce new variables yet but I decided to make four loaves since I felt rather confident due to the last loaves, that I had the more destructive kinks under control, namely burning oven and poor proofing.

Now I still don’t have an accurate thermometer so I’m still completely in the dark as to what the real oven temp was today. I do know it took a good 7 – 10 minutes longer than the recipe calls for so my guestimate of 420ºF to get about 475 was too low. Next time we do 440.

The proofing was again done in the couche: 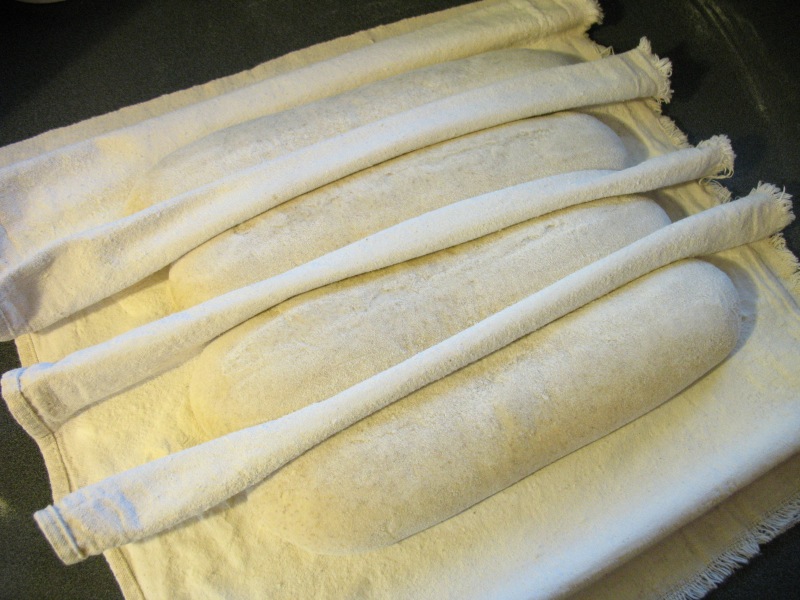 This time, though, the loaves were then put into a big plastic bag so they wouldn’t dry out. Result was perfect, the loaves came off the 50/50 rice/UAP floured canvas without a hitch so no deflating of any sort.

My slashing is still very primitive and I’m still not sure what I’m doing. I decided, as you see in the top pic, to do three diagonal slashes in some loaves. However, this did cause issues. The slashes were too far apart and the tight surface between them was wide enough to hold the bread back from rising to it’s fullest.

This may also have been due to the slashes being too shallow. I’m still reluctant to gouge the bread too much. The slash angle was good this time, not vertical but diagonal. The reluctant slashes show up most on the two loaves at left. The double long slashes definitely could have been done better to allow the neat ‘curves” that supposedly can happen. I may have needed to make them a tad closer together as well.

What would be really cool is to try different types of slashing to see what they’d each do. But I don’t have the time of multiple balls of dough to do such a practice. So I’ll just have to play with it, four loaves max at a time.

Lesson for next time: do slashes and overlap them some, keep them closer. Also a bit deeper.

Also to be done next time: do a half batch/two loaves only. The last loaf hung around far too long. Also with two loaves it can be placed dead center in the oven and not need to worry about the placement bringing up problems of hot spots and too much or too little steam, the possible reason the two loaves on the left had smaller slash expnasion than the two on the right.

Last look at these loaves: 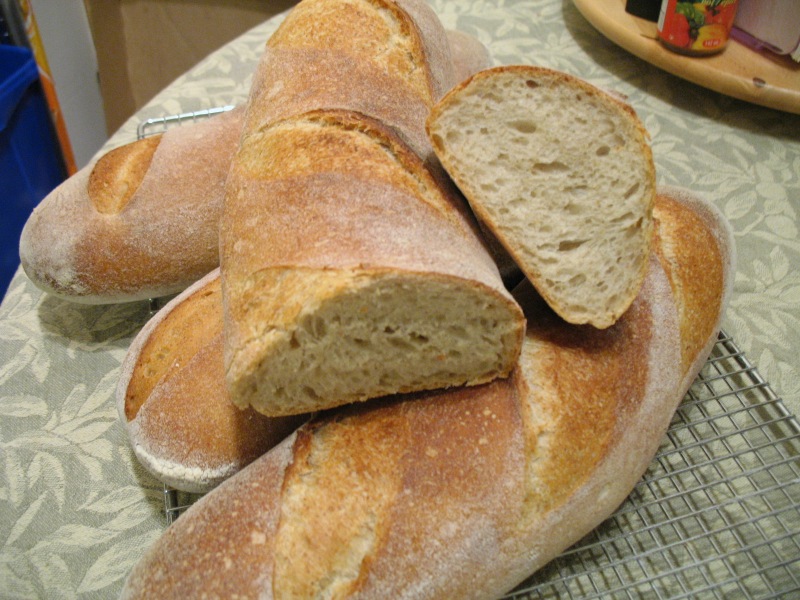 The crumb is pretty much spot on, I think. The crust is nice and crispy and a little chewy. I may stick one of these loaves in a plastic bag once it’s cooled so Mark can have his “softer” crust.

So there you go, four loaves, none burnt or flattened and the inside is decent and the taste is… well, we ate the cut chunk pretty much as soon as these were out and cool enough to not squish when slicing even though I know it’s supposed to be left alone for several hours/a day and the flavour is supposed to develop. But it’s still darn tasty even just 15 minutes after coming out of the oven! This was a 2.5 hour bulk rise and a 2.5 hour loaf proof so it didn’t have a lot of time to get “tangy” I’ll have to try putting it in the fridge for up to 16 hours after a 1.5hr initial loaf proof. See if that kicks the sourdough tang up much.

So… HOORAY!! I think we can call Batch #6 the “first” successful loaf!

One Reply to “Round Six: Much improved”