Sometimes you think you’re doing the right thing but it turns out you’re not.

This was one of those times.

Although, in reality, it’s a small problem and nothing that can’t be resolved by EATING THE EVIDENCE. Still, it would have been nice to get it a little closer to “right”. Woe is me. Let me tell you what happened…

I decided to give bread #4 in The Bread Baker’s Apprentice Challenge a go yesterday and of course (since you already know what the post title is) it was Brioche. There are three variations of it to choose from and I went with Rich Man’s version. This one  has a whole whopping pound of butter in it, vs the Middle Class and Poor Man’s versions with a half and a quarter pound of butter, respectively.

As you can see, the ingredient list isn’t exactly strange. Except that we’re not using just a little bit of that butter, we’re using the WHOLE thing. The recipe indicates that, in baker’s percentage, this loaf is 87.7% butter in the end. In case you’re thinking that means it’s 3% other things, allow me to explain in a little more detail.

END_OF_DOCUMENT_TOKEN_TO_BE_REPLACED

Since I’ve got a pattern going so far, let’s keep at it: Step-By-Step snaps of the whole process. And I’ll try to keep this going until, well, until I don’t. I have to say it’s not exactly the easiest thing to set up a small photo studio in the even smaller kitchen and it needs a little planning. This may not always be possible. Today, it is.

So first sep: The sponge…

This is simply a bit of yeast, about half the total flour and 2.5c of warm water. It’s mixed up and left to bubble up for a couple of hours. Since it’s likely you’ve seen flour and water together before, I skipped the before picture and went straight to the exciting “all mixed” snap. 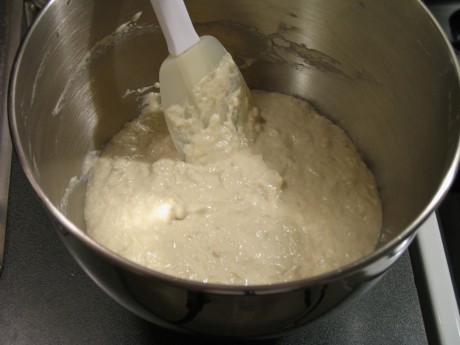 After this, the sponge bowl got covered with one of the handy dollar store showercaps and set asisde to do it’s yeasty, spongy stuff while I went ahead and END_OF_DOCUMENT_TOKEN_TO_BE_REPLACED 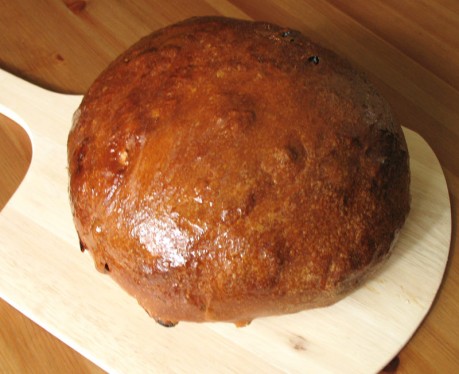 Recipe number two in the The Bread Baker’s Apprentice Challenge series is “Artos: Greek Celebration Bread“. In the preamble, Peter Reinhart tells how this is a holiday and festival bread that covers multiple variations.

The basic recipe is easily turned into “Christpsomos”, a Christmas loaf, by the simple additions of raisins, cranberries and walnuts or into “Lambropsomo”, an Easter loaf, by adding raisins, dried apricots and almond slivers, braiding and nestling red-dyed hard-boiled eggs. There are numerous local and not-so-local variations on this basic spiced bread.

I went with the christopsomos version since I did happen to have raising and cranberries, although I passed on the walnuts since we’re not big fans here.

So here we go, the step-by-step evolution of my first Artos bread…

END_OF_DOCUMENT_TOKEN_TO_BE_REPLACED

For those interested in following along with the rough dates for each bread bake in The Bread Baker’s Apprentice Challenge, here’s a table of the breads and their approximate due dates. This doesn’t account for time off for holidays and , you know, life. It’s simply a first look based on the rough draft of “one a week”. Expect it to be different once the group’s settled and things get looked at a little closer.

According to this base schedule, then, we’d possibly be looking at finishing up the Challenge around early March 2010, if no breaks were included and we went right through non-stop.

We won’t be getting to Sourdough bread until at least early December so anyone who still hasn’t fired up a starter has a fair bit of time to go before it is needed. I’d recommend making sure you’re been working your new starter maybe two months prior to requiring it. This would include a week or two to create the culture then a few weeks more for it to strengthen.

This schedule, to reiterate, is just something I worked up and is not “official”. Even when a more definite one gets published, it’s been stressed that anyone can work at their own pace, skip weeks and recipes as needed, etc.. END_OF_DOCUMENT_TOKEN_TO_BE_REPLACED

So let’s recap what we have.

“The Bread Baker’s Apprentice Challenge”, which you can read in more detail about in the linked post above, is basically a whole whack of people doing all the bread recipes in The Bread Baker’s Apprentice book by Peter Reinhart, all in order of appearance and on a weekly schedule (mostly).  It’s more of a personal challenge, I think; there are no prizes or penalties (that I know of!) for doing every single recipe or skipping a couple but we’re all aiming to cover all 43 recipes at a pace of about one per week. So we’ll still be at this come February 2010, maybe a little later given there will likely be breaks for holiday baking and such.