Considering that sourdough has been around for thousands and thousands of years, long before the introduction of grams, temperatures gauges, refrigerators, electric ovens, or even the idea that the world wasn’t flat, one would think starting your own starter is a breeze.

Maybe it is, but I had a heck of a time myself. And when I was thinking “Why is this so dag nabbed difficult, it’s just flour and water” it was even more frustrating. But in reality, it’s more than just flour and water, it’s flour with the wild yeast still on it, water that doesn’t have additives meant to kill yeast and bacteria we WANT to cultivate, optimum temperatures, feeding at the right times so as to END_OF_DOCUMENT_TOKEN_TO_BE_REPLACED

As you feed your starter, you’ll probably realize that there’s stuff you can do with it but need a bit of help figuring what. In this entry I’ll touch (and link) on a few potential ideas.

Now for anyone who’s in the process of building a starter from scratch, the portions you discard are not actually starter at this point, the yeast and bacteria you’re working hard to cultivate are still not at any appropriate level to ward off the other yeasts and bacteria that also live in the flour paste. So until you’ve got your brand new from scratch starter active and bubbling away regularly, just toss that extra stuff out. Or at least dump it into the recycle bin and let the earthworms have a nice munch.

Those who’s starter is active and are feeding on a regular schedule, you can do a number of things with that extra. What you’re putting aside is exactly the same as the small amount you’re keeping and feeding, it’s simply “excess”. That excess can be used, obviously, to start up your bread making starter or even make up new starters and switch from UAP flour to whole wheat or rye if you think you’ll be making those types of breads regularly.

But it can also be put aside into an “old starter tub” until you have enough back up to make the World’s Best Pancakes. You can also make some tasty baked good (see recipes next) or simply use it in any other baking recipe that uses flour and water, replacing the same amount by weight as you’re adding in excess starter.

Do It Yourself Flakes

If you’ve used the starter for a while and really like it’s character once it’s had a good while to develop, you could make your own dry starter flakes to save as back-up or send to friends. Simply spread a thin layer of your excess starter on parchment or wax paper, wait until it’s dried then break it up into little chunks. You can then put this into baggies and mail it or freeze it to keep for many months. Before you spread the excess starter, you may want to feed it and spread it just after it’s hit it’s peak, when it’s “well fed”.

“Why can’t I just keep it, why do I have to discard so much each time?”

The simple answer is that you need to feed your beasties a fair amount of new flour and water so even the smallest amount you’d be adding is at least the same (1 – 1 – 1) as what you start with. If you didn’t remove a fair amount, you’d soon enough be using up a TON of flour to keep your bathtub-sized starter fed as you add “as much again” and don’t discard. It’s actually more economical to get rid of a few grams of flour than to try to feed an ever expanding vat of starter.

The other reason is you really do NOT need to keep a very large “mother” starter. With the 30-60-60 system, you have 150g or about a half cup of starter; you could even do with half of that, doing 15-30-30 if you were quite frugal. But holding on to a larger quantity of starter, unless you’re a prolific baker and use a lot several times a week, isn’t any more efficient than the 150g amount. To house a two cup starter, you’d need a six cup jar or bigger and that’s getting pretty big on the counter or in the fridge. And you’d still be no further ahead than if you were doing 30-60-60. 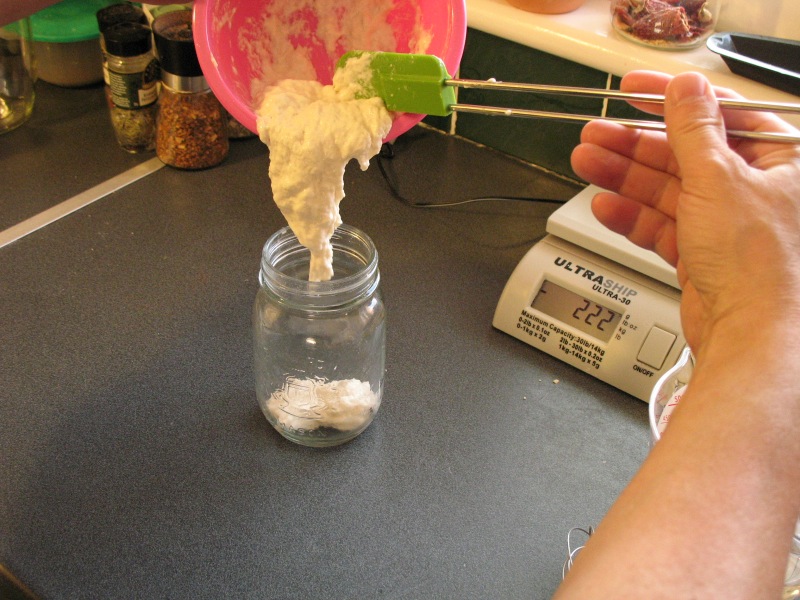 There are several ways to keep a starter, relating to it’s thickness:

There are advantages to each but for our purposes in this post, we’ll use the more common ‘thick pancake batter’ type. We’ll also be keeping it at what’s referred to in the bread world as “100% hydration”. This simply means your starter has 100% of the flour’s weight in water weight. If you use 163g of flour, you add 163g of water; if you use 47g flour, use 47g water. Your flour’s weight is always the base and your water is the percentage of that weight.

You’ll possibly see other percentages of starters, like 65% hydration starters which are more dough-like since the water weighs 65% of the flour’s weight, therefore less water than flour. This hydration level is in the area that a regular bread dough so you could actually knead it, it is that thick.

You may also see higher hydration levels, like 125% or even more, making the batter thinner. I just wanted to touch on hydration percentages because it seems to pop up a lot in the bread world.

One great thing about 100% hydration starter is no matter how much you use, you’ll always know that it is half water and half flour so it’s easy to adjust any recipe.

END_OF_DOCUMENT_TOKEN_TO_BE_REPLACED

There are a few ways of getting a pre-made starter

Whether these are purchased or given by a friend, they’ll be handled as described below. Then, of course, you could make your own from scratch and that’s a whole ‘nuther set of instructions which you can find here.

The first two methods mentioned above mean you’re going to basically just keep feeding your new starter as it had been before; the place or person you got it from should have given you their process which is really just your standard feed. Their particualr methods may use more or less water or flour, so just learn what was used and keep it up.

For the flake version, however, you need to rehydrate/rejuvenate it and get it up to speed again and from that point, you too are on to the maintenance process. But first we need to get those flakes turned into a viable, wet starter.

END_OF_DOCUMENT_TOKEN_TO_BE_REPLACED

If this is your first time to the new blog, you’ll find several entries detailing my journey into the world of sourdough bread as well as info and suggestions on how to start, feed and use your own starter or one give to you.

I’ll also try to keep up to date with my own attempts at getting bread to rise and bake and, hopefully, taste great.

Before we get too far in though, I want to stress right out of the gate that I‘M NO SOURDOUGH (or even plain) BREAD EXPERT. The info I’m posting here is basically stuff I’ve hunted up on the intarweb recently and if you’re brand new at all this too, know that I’m just a small step ahead at best. What i post here may not be the most definitive techniques and methods and may in fact be somewhat off as I’m just trying stuff out and sharing the steps and results, I’m in no way saying “this is the best way to do X”. All I’m really saying is this is the most logical way I’ve seen so far and we’ll see how it works.

Whew! Now that the pressure is off a bit, let’s get started with some info on feeding and maintaining a starter. I’m going to basically pillage the info I’ve already posted on the site but want to make it so there’s a way to discuss the methods (which there wasn’t with the plain web page, ergo why I’m going bloggish).

So I hope you enjoy and find some of the stuff I post useful, don’t hesitate to add your own comments about what I’m adding here and suggest alternatives and point to sources elsewhere on the net for better, different and maybe even completely contradictory stuff. As I say, I’m just plodding along here and learning as I go.

That said, let’s start up!