April’s breads for MellowBakers.com include three variations on Pain au Levain from Jeffery Hamelman’s book Bread: A Baker’s Book of Techniques and Recipes. Today’s entry is for the first of the three, simple Pain au Levain. This translates to Sourdough Bread.

One thing that Hamelman makes a point of noting is that this bread is not given a long, slow retardation overnight. The subtle flavours for this loaf and it’s two companions, Pain au Levain with Whole Wheat Flour and Pain au Levain with Mixed Sourdough Starters, are all achieved with relatively short builds, even though the starters themselves do need to be made up the day before.

Once those levain builds are made up, it’s a pretty quick bread, for a sourdough.

If you’d like to give this bread a try, you can find the recipe in Jeffrey Hamelman’s book BREAD on page 158. You can also find an adapted recipe from Wally at TheFreshLoaf.

As always, I set out all the ingredients ahead of time… 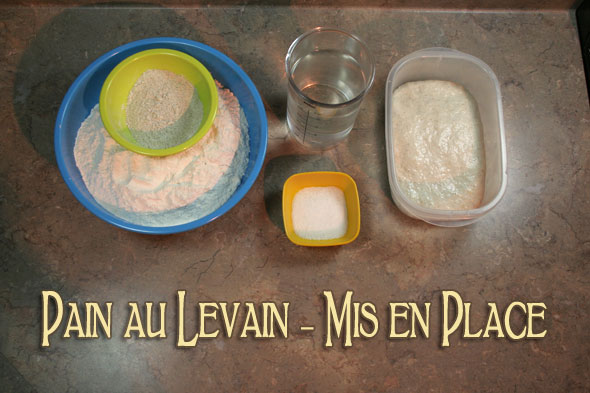 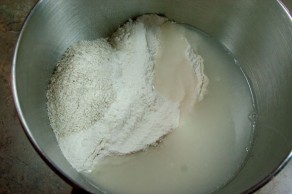 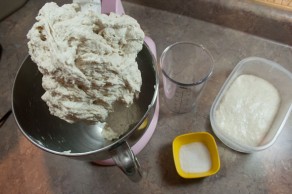 We put the flour and water into the mixer and mix using the paddle until everything is a shaggy mass. The levain and salt wait it out on the side. Once we have the four well mixed into a shaggy mess, we set this aside for 20 – 60 minutes (I went with 40) to autolyse. This means it rested and the water had a chance to absorb into the four and the gluten began to develop, without any mixing on our part. 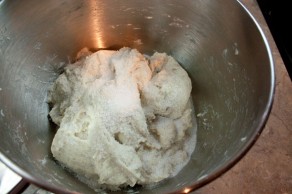 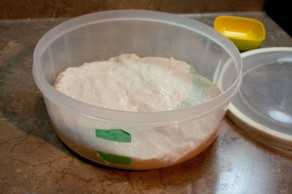 After the autolyse, the levain and salt is added and the dough is now mixed with the kneading hook for about 6 minutes on speed 2 until we reach, as per the book, a “medium consistency”.

I’m not exactly certain what that is, precisely. I know this dough seemed somewhat slack and tacky verging on sticky.

Once mixed and I can pull a good windowpane, the dough gets a bulk fermentation. Total bulk time: 2.5 hours. 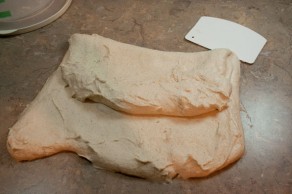 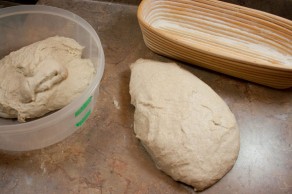 The dough gets two stretch and folds during bulk ferment, at 50 minute intervals.

Once the bulk is done, the dough is divided in two – in this case, about 750 grams each. 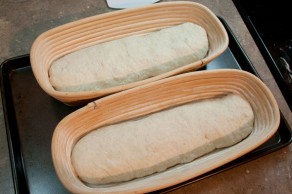 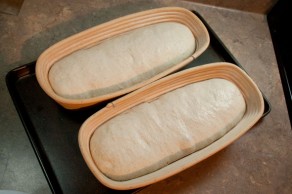 The two pieces are then shaped and placed into the floured cane baskets and popped into a plastic bag to do the final proof. This takes about 2 to 2.5 hours.

Here I went for the full 2.5 hours and the dough had pretty much doubled. 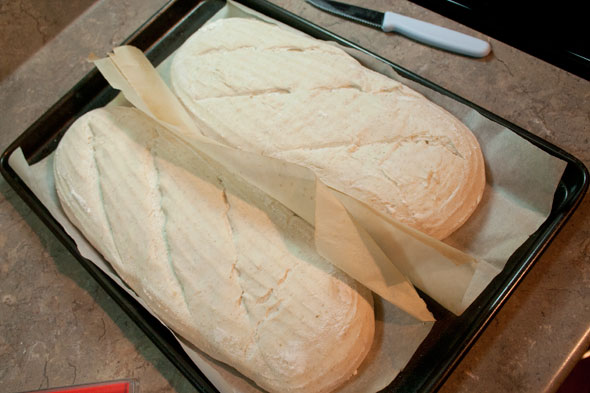 I flipped the baskets over with a bit of parchment and the dough came out. Unfortunately, not without a little resistance. I guess I should have been a little more generous with the rice flour basket dusting, particularly since this seemed to be rather wet dough.

The now somewhat flattened loaves get a slashing and into the pre-heated 440ºF oven they go. Not shown: the pan is covered with a large aluminium turkey roaster to trap steam, this is removed after 15 minutes. The bread bakes in total for 40 – 45 minutes, according to the book. 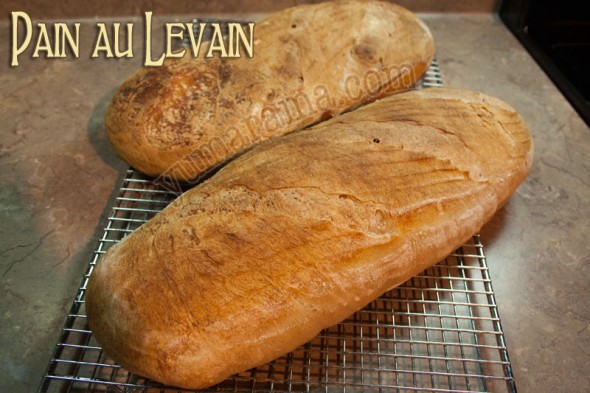 Here’s what I got after only about 30 minutes. The internal temp was already above 205 – the aim is typically 198 –  205ºF – and there was still more than 10 minutes to go officially. The bottom, not seen here, is decidedly dark though not burned. The oven spring is not as lively as I would have liked, the slashes, although they did open up, did not develop “ears” – possibly due to too timid slicing.

This being a new oven to me, I need to consider a little modification in future bakes, like adding an extra pan under the first in order to insulate the bread from what I’m guessing is excess direct heat from below. I’m also going to need better steaming since is seems the crusts on the last couple of hearth breads set up too soon.  None the less, it’s hardly a failure, just not as purdy as it might be. 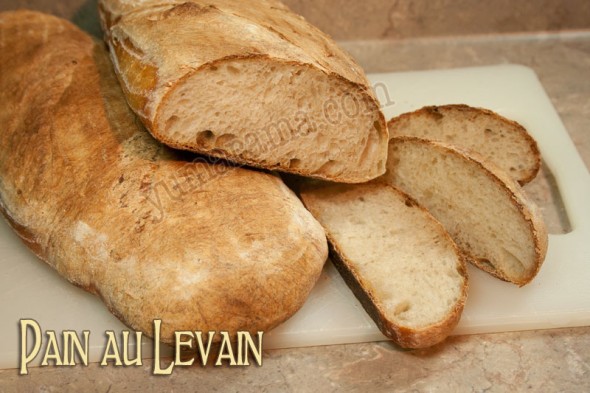 After cooling for about 20 minutes, I cut the flatter of the two loaves and had a peek inside. The crumb is rather even – I think I was hoping for a more open. bubbly inside – but still a nice golden tone and it has a very good flavour. The bottom with the slightly overdone crust is a bit on the tough side right now, we’ll see what getting bagged will do for that. It will also soften up the upper crust, not really avoidable since we aren’t about to eat this loaf in one sitting.

The verdict: Very nice and, as Hamelman noted, subtle but still notable ‘sourdough’ flavour. So the bread itself is a success, the slashing and oven spring needs work as does figuring out this new oven a little more.

I’ll try to follow my own suggestions on MellowBakers and make the other two versions, saving/freezing a bit of each bread so I can teaste-test them all side by side. I make no promises though! Since I’m the only one who eats these loaves, it will be a while before I can logically get to the next ones.