What would happen if you ran out of bread flour but still wanted to make bread? Or the store had an awesome sale on cake flour which you were tempted to use instead? Flour is basically just flour, after all, no? There’s not much difference between Pastry and All Purpose, besides a bit more protein, right?

As an experiment, the class did a test this week to see what each of four types of flour could make, using the same recipe for each and changing only the type of flour used. The recipe was put together by team of Chelsea, Connor and Lauren.

We tested simple panned bread loaves made from:

Each batch were made with the exact same ingredients except for the flour, in the same quantities and mixed in four identical 10-quart mixers. Each mix made four identically sized loaves and baked for the same amount of time. Although not under strict laboratory controlled conditions, these were, in effect, identical breads.

One difference was allowed: the higher protein flours, Bread and All Purpose, were given a little more mixing time. This is because their higher gluten content needed more kneading in order to be developed properly. The lower gluten flours developed their lesser gluten amount faster.

Once mixed and bulk proofed, the doughs were divided into four loaves and panned then given a final proof. 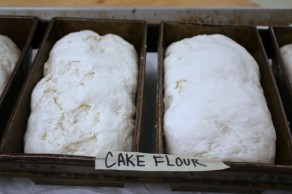 The cake flour didn’t fare very well even in these early stages. As you can see in the photo, the structure of the dough is terrible. Cake flour is an extremely finely ground “soft flour” as it has such a low protein (gluten) level, about 6 to 8%. Having very little gluten development, it was unable to form a mesh of stretchy ‘fibers’ to trap any of the gasses given off by the yeast. What gluten structure there was simply tore. In a cake, this is a valuable aspect since cake batter traps only tiny bubbles of gas from (usually) baking powder. Low gluten means a softer, more tender finished cake. But in bread, these are not desirable traits. Further, the cake flour is very white, being well bleached, a very unappetizing looking dough, even before baking. Note that this cake flour is not “self-rising” – it has no chemical leaveners in it. 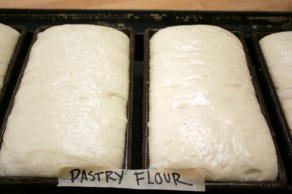 Next we have the Pastry flour dough, clocking in at around 9% protein. This has a small amount more protein than the cake flour but still not a lot. It was able to form enough structure to not tear across the surface but you’ll note it is extremely shiny which indicates that what gluten development has occurred has gone past it’s maximum mixing. At this point, the gluten is no longer able to hold the water in the dough which gives it that wet, shiny look. You can see this wet, shiny surface in stronger doughs too, if they are allowed to be overmixed, again breaking down the gluten which can no longer trap the water. 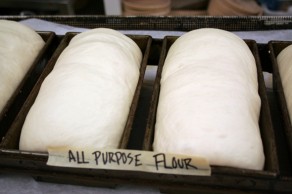 Here we have the All Purpose dough – in Canada, that is generally in the 11.5% protein levels. This dough shows a much better surface due to its higher gluten development. It was able to trap the yeast’s gas and has clearly expanded considerably more than the two previous doughs were able to do.

Although this dough seems to be doing well here, it is not the best choice for making bread as that 11-12% protein is not optimal for the structure of the bread. Generally speaking, “all purpose” flour is not used in bakeries since it’s neither best for bread or pastries, falling somewhere in the middle of the two. A bakery needing “All Purpose” could well blend 50/50 Pastry and Bread flours and have a decent approximation of All Purpose, without having to stock it. 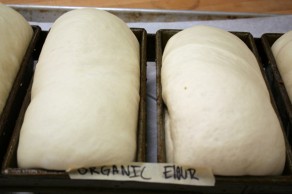 Lastly, we look at the Organic Bread flour dough at about 13% protein and can see readily that it has risen even better than the All Purpose flour dough. Its gluten development is stronger and was able to stretch and still contain the gasses. The surface is markedly better than the Pastry and Cake doughs although not notably different from the All Purpose – the improvements between these two will occur more during the baking stage. One aspect that is evident here, however, is that the dough colour is noticeably more golden than the All Purpose, which has a whiter tone.

Next: the doughs go into the oven for a bake.

These breads were all baked in the same oven at 180°C until the internal temperature reached around 93°C. 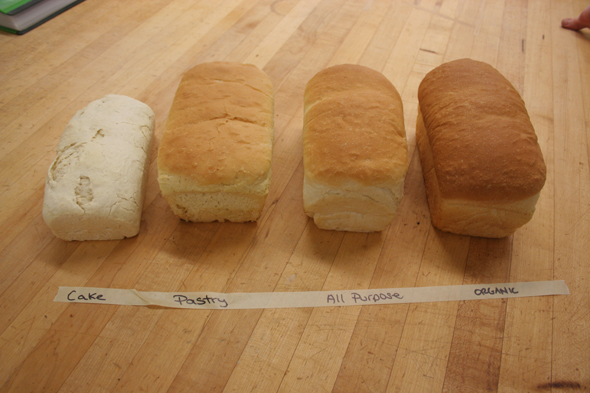 Needless to say, the Cake flour loaf is a total failure. Not only did it not rise, it failed to even brown in spite of being in the same oven as the other loaves. Why? There is a lack of natural sugars in the dough and sugar is what caramelizes to give the golden crusts seen in the other loaves.

The Pastry loaf looks slightly better but was still unable to increase in size enough during baking as it’s gluten had pretty much maxed out during mixing.

The All Purpose faired a bit better although not as well as the organic bread. It shows it’s bleached aspect in the lighter crust although the fermentation process was able to convert the starch in the flour to sugars and allow a somewhat reasonable amount of browning.

The Organic Bread had no bleaching to hinder it’s colour and supplied plenty of sugar for browning. The gluten structure shows excellent expandability. 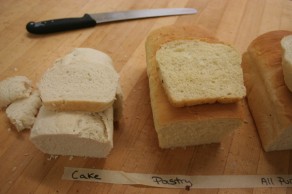 Slicing the breads, we look at the crumb. Obviously, the Cake flour bread is cakey in texture. There’s no discernible expansion, it is dense and heavy, having held much of the water. The colour is also rather unappetizing and the slices break apart easily. All the things that make poor bread would make a good cake however, using the right recipe. And the bread had an unpleasant scent, as well.

The Pastry flour bread is a slight improvement on the previous one. The colour of the crumb is much better although the texture is still somewhat tight. The loaf has no spring and when pressed doesn’t come back much.

Both of these loaves are clearly lacking gluten and are not meant for bread making. They are, on the other hand, superior at what they are meant for: delicate cakes and pastry where bread flour would fail just as badly at those tasks. 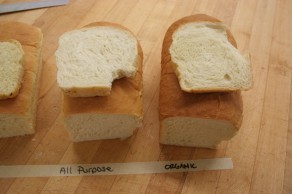 Next, we look at the All Purpose bread. The crumb here is very white due to the flour being bleached. The development of the dough is an improvement from the previous loaves although the texture is still on the tight side. OK but we can easily do better.

The Organic bread crumb is, for a sandwich loaf, lightest of all and the loaf does bounce back when pressed. This means the gluten is well developed and the starches have set nicely. The creamy colour of the crumb indicates the flour is unbleached and will have a better taste. This slice of bread will toast better than the other breads, imparting more flavour. And you get more bread volume for the same weight of flour.

Although none of the above results are really surprising – few people would expect cake flour to make good bread – it’s good to see what happens and really know what the results are. This also visually demonstrates the benefits of higher gluten in making a good loaf of bread, even an enriched sliced sandwich loaf like these.

18 Replies to “All Flours Are Not Equal”