After trying multiple times and for long periods to get a starter started, I finally hit on a success. I used SourdoLady’s Pineapple Starter recipe (except I used OJ) and, lo and behold, foaminess overflowing!! Literally. Twice, even. So after cleaning up the goo off the counter for the second time, it was time to bake up my fist loaf of actual sourdough bread. I know, this is a rather immature starter but IT’S ALIVE!!

I had hunted down what looked like probably a good, simple recipe with few ingredients and little chance of messing it up. I used the Sourdough International’s San Fran Sourdough recipe. Pretty simple: 1/2 cup culture (they expect you’re using their San Fran starter) 2 1/2c water, 2 teaspoons salt and 7c flour

After making up the preferment (1 1/2c flour, 1 c water + the 1/2c starter) and letting it proof overnight, you then add the rest of the stuff, holding off 1c flour to knead in. “Mix in and spoon knead remaining flour, one cup at a time, reserving one cup for the floured board. When too stiff to mix by hand, transfer to the floured board and knead in the remaining flour.”

Hmmm… “When too stiff to mix by hand…” Never got to that one. The dough was soppy and runny and gooey. This can’t be right, I thought, but no, follow the instructions, only add the last cup of flour as you knead it. But it was still runny, only a little thicker than thick pancake batter. maybe once it sits for a few hours… Nope, still wet and extremely soft. Then I remembered that Mike, on his site, says several times not to make your dough stiff, it prefers to be wet. Hmmm… This wet? Naw, it is barely handleable. So I did add another cup or two. But still quite soft. Didn’t want to push it any further. So I made my loaves. Soft, squishy loaves. After they’d sat for about an hour, I popped them onto the pre-hearted stone at 375F (again, strange, most recipes say 450 or so).

40 minutes later, this is what I got: 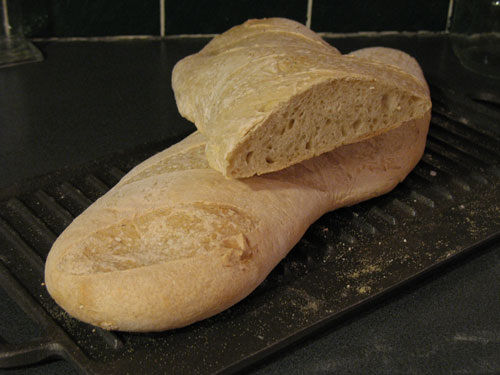 Rather pale crust and not much rise although a fair bit of spread.

However, it’s quite yummy. Yes, I know, you’re supposed to let your hot loaf sit for a while and it’s best a few days later. But come on, first loaf… had to try it!

So next time around, I’m on the hunt for different recipe unless someone has tips. Probably like “Are you SURE you didn’t just add too much water?!?!” Or maybe my “cups” of flour didn’t match theirs; I was going with 120g cups, maybe theirs was closer to 200? It would be nice if all recipes included gram weight.

Also: How do you store your bread? I dread putting it in a plastic bag and losing the crunch of the crust which is quite pronounced. Should I put plastic and a rubber band around just the cut end? What’s the normal way? What did people do 150 years ago when Baggies weren’t as popular?

Anyway, I also wanted to put out a big thanks to MiniOven and Mike Avery for their help while I was getting frusticated trying to get that insanely tricky combination of flour and water to do what it’s supposed to and failing.I can now safely discard the five different attempts at starter and keep the one that’s alive, alive. (I had also decided, a week back, to order Carls which should arrive sometime soon, so I’ll fire that up and then I can do a side by side comparisson test.)