Here we are at the 42nd recipe in Peter Reinhart’s The Bread Baker’s Apprentice with only one more to go in the BBA Challenge. This is, I’m hoping, a good counterbalance to the previous White Bread that was a bit lackluster and will help to close up the Challenge with a bit of a bang.

This recipe, as well as the next and final one, is a cheese laden bread and looks to have definite character. This is not bread for peanut butter and jam sandwiches – well, maybe it is – but will decidedly want to be paired with more robust spreads and topping such as deli meats or served with a stew.

This is an enriched bread and takes only one day to make, as long as you’ve got your sourdough starter ready. I fed my starter early in the morning and, using the excess, built up the required 300g in one go; it was ready to go in just a couple of hours.

This mis en place turned out rather pretty. 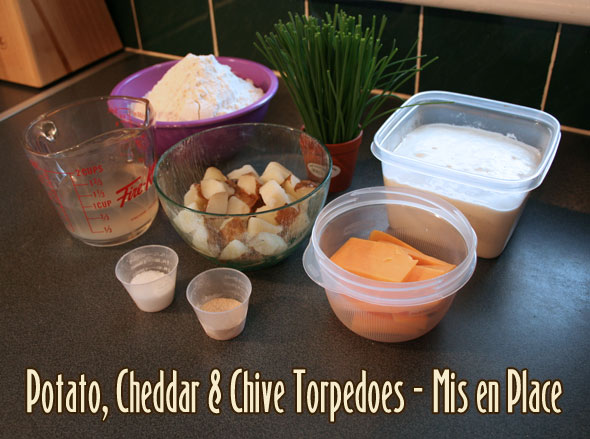 The players in this production are: Bread flour, 1 ounce or 28.3g of fresh chives, which turns out to be a fair bit, our perky starter, boiled and unpeeled potatoes & potato water, both cooled, about 120g of sliced cheddar, salt and yeast. So although it does have sourdough starter, the bread still calls for instant yeast which is how we can do this bread in just one day.

We’ll cover the cheese and put the chives aside for the next hour or so as we need to prepare the dough first.

We mix half the flour (roughly), the starter, potatoes, yeast and about 1/2c of potato water and mix until the dough forms a ball. Although the book does say to “use a large spoon” (I opted to not use the mixer today), I found it was pretty pointless and just went in with my hands after a minute of spoon mixing. Hands and the plastic scraper were much better for this job.

We work the ball of dough a little until it’s well mixed, no pockets of dry flour are left at the bottom and the potato bits start to be incorporated. Reinhart then says to leave the dough uncovered for 30 minutes without any further explanation but this does give the dough a little autolyse time.

After 30 minutes rest, the remaining flour is added  along with the salt and we can add “as much as you need of the remaining water”. I ended up using 3/4 cups in total. Although throughout the Challenge I found my flour to absorb more water than the BBA recipes have called for, this time I seemed to have used less than the full cup available. The dough is quite soft and sticky. Perhaps the addition of the boiled potato added a fair bit of moisture.

The dough ball is then turned out onto the counter and kneaded for about 6 minutes.

Even after that kneading, the dough is still quite tacky.

I then chopped up the chives – it was really a substantial amount and made the kitchen smell great – then keaded it into the dough for another 2 minutes or so until evenly distributed. 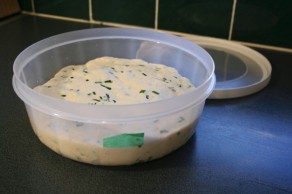 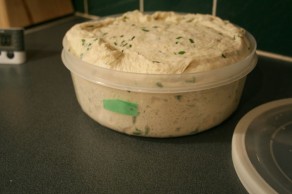 Once mixed, the dough ball is placed into an oiled bowl and allowed to proof for 90 minutes or until doubled.

At about the 75 minute mark I checked the dough and noted that it had actually popped the lid and got more than double sized. Glad to see the new jar of instant yeast is working!

The dough is again turned out and split in (eyeballed) two equal pieces. Each piece is lightly stretched out to make a 6″ X 8″ rectangle. 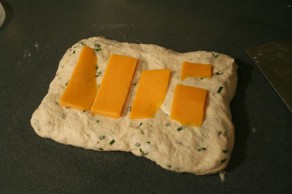 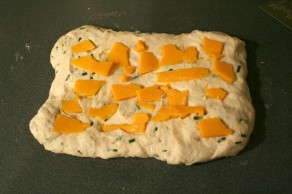 The recipe says to place the cheese slices onto the rectangle then roll it up to form the torpedoes. I started to do so but found the cheese chunks too big – they were breaking through the dough. So I decided to break them up into smaller bits. 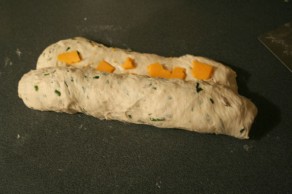 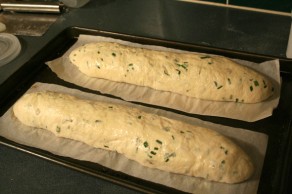 This made the rolling up a lot easier with no cheese trying to escape.

The two loaves were then formed – I don’t think I got the “torpedo” shape done very well, the dough was still very soft and tacky – they were placed on parchment (forgot to sprinkle it with cornmeal) got covered and were ready to do the final proof for about 1 hour.

The “hearth oven” setup was preheated to 500ºF while the loaves proofed. 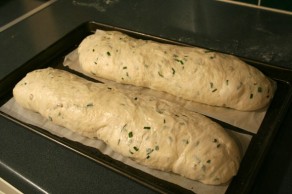 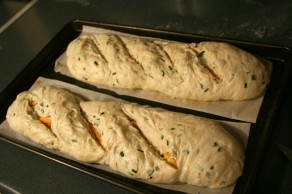 After the hour was up the loaves were “nearly doubled in size” but seemed a bit on the flat side. I hoped they’d get good oven spring. I slashed them deeply, trying to find the cheese layer inside, as per instructions. This added to the flatness issue. They didn’t totally deflate but certainly did seem to widen out.

The loaves now go into the 500º oven, I decided to leave them on the parchment in the pan but they still went onto the oven stone. Tossed a cup of water into the heated fry pan in the oven and sprayed the oven walls, as per instructions, every 30 seconds for 3 turns, then turned the heat down to 450ºf. The loaves stayed in for 35 minutes with a spin at the halfway mark. Once bakes they were left to cool for 45 minutes.

And here they are fresh out of the oven: 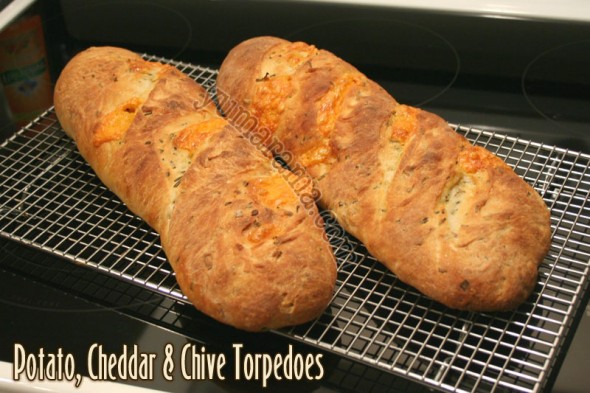 The loaves had pretty decent oven spring, although they remained rather wide. But then I look at the photo in the BBA and that bread seems to be a rather low and wide bread too, so perhaps this isn’t unexpected. The slashes allowed some of the cheese to bubble and drip which does look quite yummy.

And after the cooling off period, I was able to finally get a couple of slices out to check the crumb. And, since I had it sliced, I thought I’d have a taste too. 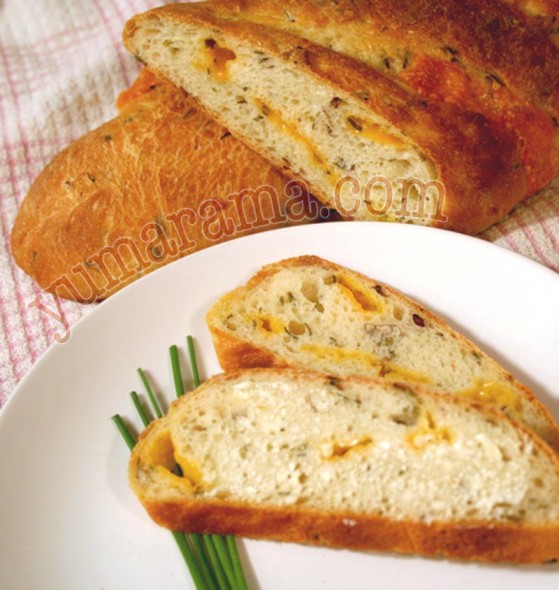 This is really good bread. The crumb texture, visually, is even with smallish holes. I expect that’s the potatoes in action. The spotting of potato skins adds some visual interest, there’s the cheese pockets here and there and the spots of green chives throughout. Visually, very appealing.

The crumb is a little tighter that I’d have expected but still soft, the flavour of the chives is prominent without being overwhelming, the cheese adds a bit of pleasant surprise here and there. The crust, right after cooling, is light and thin, not too hard but still crispy with a little bit of chew. We’ll see what happens after storing it overnight.

All in all, this is decidedly a major step up from the last bread and a good sign we’ll be ending the Challenge on positive notes. Although this is really a ‘specialty’ bread not specifically suited for all occasions, it may not be the best match for jam toast in the morning, it can still be a great bread to pull off for family dinners, I’d expect it would stand up nicely to heartier meals like stews or roast beef. It’s not a shy bread and makes for a delicious slice all on it’s own too.

This one goes on the “Do It Again” list for sure.

(It’s still early so I’ll add more bloggers as more people get to the Potato, Cheddar and Chive bread.)

Oggie at I Can Do That! says this one is “Love at first bite!”
SallyBR at Bewitching Kitchen says it’s one of her favourites.
Anne Marie at Rosemary & Garlic did hers partly by proxy and they came out lovely.

The final bread in the book, Roasted Onion and Asiago Miche, sounds like a lovely bread to close the challenge with. It is, again, a sourdough/instant yeast hybrid. Unlike today’s bread, it is a three day affair (mostly just waiting for stuff to ferment overnight) which I’m rather looking forward to. It also has a pound of cheese in it. How can that possibly be bad?