Here it is, the final bread in Peter Reinhart’s The Bread Baker’s Apprentice and also the last bread in the BBA Challenge which began back in May of 2009. Is it really almost a year ago? Wow. Well, about 43 weeks in all since the idea was to make one bread every week and this is bread #43. Granted, I did NOT make every single recipe, a few were for certain not going to be enjoyed in our household and it was better to skip than to throw away a partially eaten loaf. Still, the bulk of them were done and we’ve found some nice breads as well as a couple of duds we’ll not be getting back to.

None the less, we’re now looking at making another cheesy bread, this time a three day extravaganza, according to the book. Day one: mix the sourdough sponge and allow to proof for 8 hours. The mixing part took about 4 minutes so this isn’t exactly a difficult or time consuming step. The sponge is basically just sourdough starter, water and flour. I made this up very early in the morning and had it proofed 8 hours later that day. Here the recipe says to chill it until tomorrow, then let it sit an hour to warm back up. I decided to skip that chilling part since the dough was going to again chill overnight in the final proof stage so flavour development would still occur while I shaved a day off the full run. Since this is a heavily cheesed and onioned loaf, I don’t think the dough flavour will suffer.

So later that same day, I’ve got my ingredients ready and I’m heading into step two, mixing the dough and bulk proofing.

Day two is supposed to be preparing the roasted onions then mixing the dough and refrigerating overnight. Day three  is finishing the loaf’s toppings, final proofing and baking in the hearth oven.

So let’s look at the ingredients: 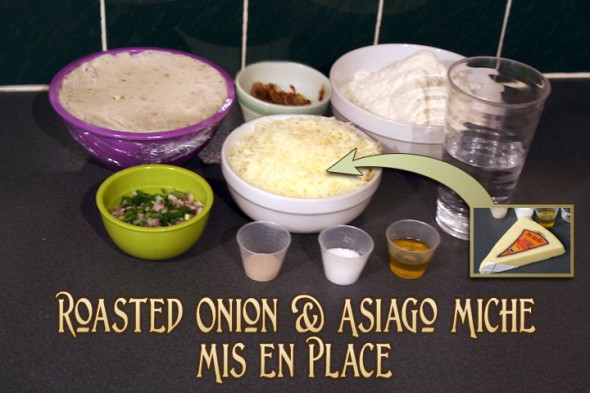 Clockwise, we start with the sponge, roasted onion (I skillet fried them to avoid firing up the oven to 500º just for this), unbleached bread flour, water, oil, salt, yeast and a heaping load of chopped up chives and shallots. In the centre is the asiago cheese, all of the inset wedge was shredded.

I should point out that I chose to make just one loaf so halved the recipe. And someone wondered how to say “Miche” – which is simply “meesh”. You’re welcome, Punkin.

Step two is the mixing of the basic dough.

First thing is to mix the flour and instant yeast, then add the sponge and water, stirring to blend together until all the flour is taken up. Although the recipe says to use a spoon, I’ve been skipping that and just going in with my hands and bowl scraper and mixing it up manually. It’s a lot easier and you can really get into your dough, making sure to get the last few pockets of dry flour into it. The bowl scraper does a great job of cleaning up the sides of the bowl as you work.

The ball of dough is left to sit for five minutes, which is a short autolyse.

Note: the recipe doesn’t even hint at mixing this with a machine. Which is fine, it’s really a simple to put together bread. 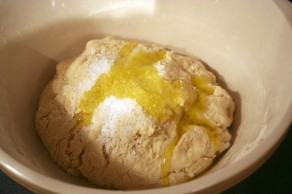 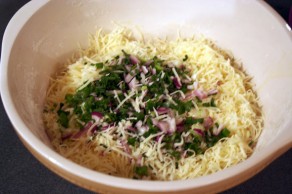 Next, the salt and olive oil goes in, gets mixed up into the dough (again, I did it by hand), then the shallots and chives and half of the cheese get added and worked in a little. Very little because next… 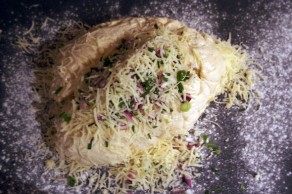 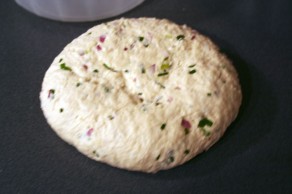 … we turn the dough ball, chive mix and cheese onto the floured counter to knead for about 4 minutes until the whole lot is well distributed. Yep, just four minutes, we’re told. The final dough blob is a little tacky but not too bad to handle and rather supple. 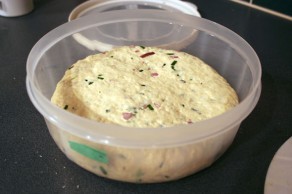 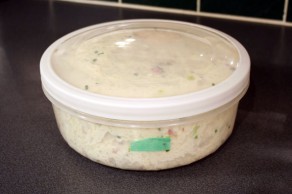 This dough ball is then placed in an oiled bowl and allowed to bulk proof for two to three hours or until doubled.

I checked on it at 90 minutes and it had already expanded to completely fill the bowl, so a little more than doubled. As I was getting the counter and pan ready, the lip popped, letting me know this dough was getting impatient. 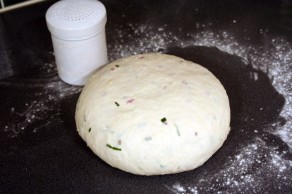 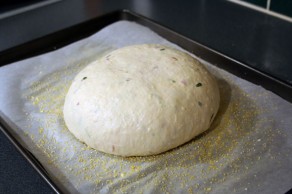 So once more onto a floured counter it goes and gets shaped into a boulle and placed onto an oil-sprayed and cornmeal-sprinkled parchment. The dough ball get sprayed with oil, loosely covered in plastic film and is now ready to get refrigerated overnight. It will come out in the morning to de-chill and for the final steps. 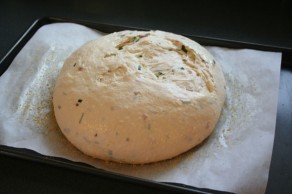 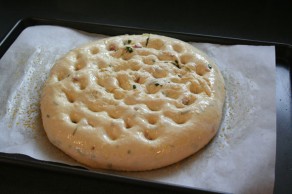 The next morning, the dough comes out of the cooler and is allowed to warm for 2 hours then do a final proofing for another 2 hours. There was some major expansion on this process as can be seen by the large gash in the surface.

The dough is then oiled and dimpled. This flattened the shape out considerably, even though I was careful to not degass too much. 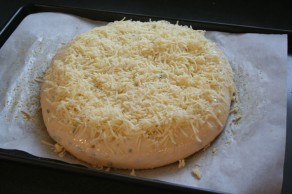 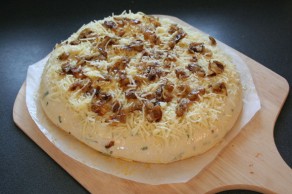 The remaining cheese gets spread across the top of the dough, then the roasted onions are added. I’ve now transferred the dough and parchment to the peel.

The dough is left to rest for 30 minutes while the oven finishes preheating to 500ºF (with stone). This is then left to rest for 30 minutes as the oven finishes preheating to 500ºF with baking stone. The temperature is reduced to 450º and the bread is then baked with steam  for 20 minutes, given a spin for even baking and baked for another 15-20 minutes or until it reaches 195ºF inside. I found that at the 10 minute point of the second phase (30 minutes total) the internal temp was already 185º and the onions had started to burn so I covered the loaf with aluminum foil, turned the oven off and let the remaining heat finish baking. 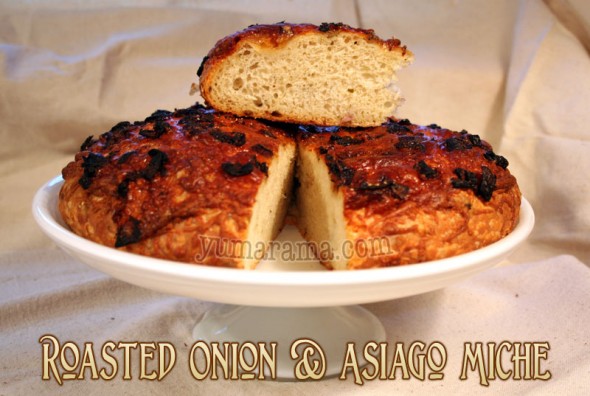 And here’s our final results.

The kitchen did get a bit smokey from the rather charred onions but smelled great. The cheese melted and ran down the sides a bit but did not overcook.

Once cooled, I cut a slice and the crumb turned out even and fine. The flavour is VERY cheesy, somewhat salty and the roasted onions (avoiding the very blackened bits) are quite nice. The crust is crispy yet still thin so as not to be too tough.

This is really good bread and a great one to finish up the challenge on.

What I’d do differently next time: add the roasted onions a little later in the baking process so they don’t burn. I would think popping them on at the 20 minute mark would still give them plenty of cooking time while letting the cheese and crust develop nicely.

Oggie at I Can Do That! was the first to the last recipe and gave this one a 4.5 rating.
SallyBR at Bewitching Kitchen ranks this as the 2nd fave of all 43 breads, after the Potato Cheddar and Chives from last week.
Phyl over at Of Cabbages and King Cakes called it “not a timid bread” that demands the spotlight.
– Phyl is also going to be challenging himself with a new book, Modern Baking, which covers breads, pastries and cakes.

Wrapping the Challenge up

As those of you who have been following may note, I have skipped a couple of the recipes along the list, mostly due to knowing for sure the bread in question would not go over well here and I’d end up chucking a half eaten loaf in a few days. There were a couple that I simply skipped over because I did not have the ingredients at hand. These I may get back to at some point.

What I got from this challenge: well, as expected by most people who have joined up, we’ve got to do breads we would otherwise probably never have tried, like right out of the gate, the Anadama bread which turns out to have been surprisingly good,even as a sandwich bread. And of course, there was lots of learning along the way, practicing skills and developing some techniques, figuring out that much of the time the mixer really isn’t all that necessary. And getting to play with breads along with dozens of other people, learning along and from them too.

I want to give a shout out to my fellow BBA Challenge bakers who’ve made this little experiment a lot of fun, many of them having added comments to the BBA breads I’ve posted as we’ve been going along. And of course to Nicole at Pinch My Salt for coming up with this dastardly idea  in the first place. You can also check out #BBA on twitter to see who’s where along this road; there are still plenty of folks  working through the challenge at a more comfortable pace (they’re smart).

So what were the fave BBA recipes?

In no specific order, I’d definitely be happy whipping up any of the following:

There were others that got good reviews here at our house but these seemed to have stood out above the rest.

My thoughts on The Bread Baker’s Apprentice:

Since I did get a chance to make a few of the “tester team” recipes in his latest book Artisan Breads Every Day, I know that he’s since made a point of including grams, allowing more autolyse, has recanted on the “barm” issue  and introduced Stretch and Fold into his techniques.

These are all great yet simple improvements that will assist people in making better and even easier breads.

But no, I’m not suggesting that this book become the next “Challenge”. 10 months is plenty for me right now. I’m looking forward to doing something a bit different from a set batch of recipes.

So… what’s next then?

Well, now that there isn’t a “specific bread” I need to get to next weekend, I’m free to finally start hitting the ones I’ve been eyeing in Hamelman’s Bread: A Baker’s Book of Techniques and Recipes. This book is a little more specific in it’s technical information and I’m looking forward to playing with the recipes here. I’ve already done a couple of the “standards” – the Vermont Sourdough and the 40% Rye and they’ve been very successful on several occasion.

So once we’re getting close to the end of the current Miche, I’ll see what tickles my fancy and add a new post to the blog.

Not sure how much detail I’ll keep going on with – the step-by-step pics are a bit of a drawback when you’re up to your elbows in flour and dough. I guess I’ll just have to see how that aspect pans out. If I do keep that up, I decidedly want to get a better photo set up in the kitchen so the lighting is consistent and helpful.

I’m also toying with the idea of doing a group bake where a bunch of us pick a recipe and all try to make that bread/goodie at some point in the month. Very casual, no strict deadlines and a variety of potential baked goods, jump in or out as your schedule fits… If this sounds like it may interest you, please leave a comment below. It would obviously start with just a small group of folks, with a focus on really reviewing the recipe in question, detailing it’s positives and negatives, what improvements people make to it, etc. This is still much in it’s idea stage so input on setting this up would be most welcome. I will have a forum set up for discussion so everything is centralized.

I’ve already set up space and started up the Mellow Bakers… read about it here, then join us on the forum at MellowBakers.com

See you all then!