Yeah, it’s been a few months. Not that I haven’t made bread, I have, numerous batches in fact. But they were really mostly “sandwich” bread and all basic yeast things. Not as tasteless as store bought “Wonder” type stuff (which they were meant to replace) but not terribly exciting, either. On the up side, these numerous plain breads allowed me to play with the oven’s temp a bit and I think I have it tweaked to be pretty accurate now so things don’t burn too much. So let’s get on with today’s bake. 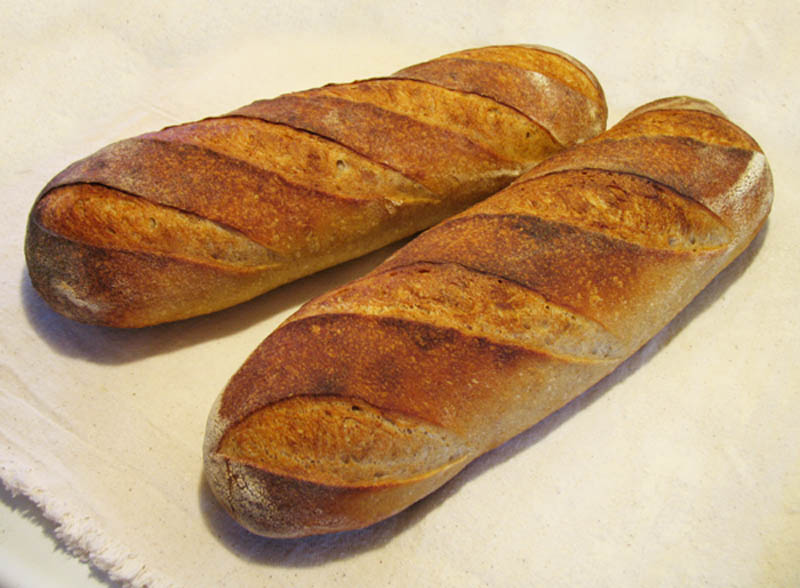 “Today” is a bit of a misnomer, I’m thinking. I started this batch three days ago after feeding Audrey 2 and Carl out of a two week stint in the fridge. By their third feed they were back to bouncy and fluffy within 8 hours (I was off at work, so I don’t really know how quickly they doubled). So this has been a few days process. The pre-build took a while – but thats’ expected – then the fermentation period took the better part of a day and the final proof took over 16 hours of fridge time. This recipe is the Hamelman Vermont Sourdough from the book Bread: A Baker’s Book of Techniques and Recipes.

This time around, the dough was decidedly stiffer than the Norwich Sourdough I’d made which is a take off of this one. Not exceedingly stiff but stiff enough that when I slashed, it didn’t all just collapse and make flat brad as the others have previously. Totally my fault, though, since I don’t really have a good grasp of how stiff a dough should be and didn’t adjust the flour; this one was good though so now I’ll have something to go by.

The crust is also more solid although it looks like it may have been a bit overdone here. The recipe says 460ºF for 40 minutes but I pulled it out at 30 as it was already rather dark. Looking at the bottom, it’s a tiny bit burned, just a small stripe in the center. So the oven is still not 100% accurate. But the insides had reached 200ºF therefore it was done enough already.

It’s still cooling so once it’s ready to slice I’ll add a pic of the crumb as well.

I picked Audrey 2 as the starter for this one simply because as I was feeding the two starters, she seemed to bulk up the most – maybe 3 times vs Carls’ 2.5 times. And I hadn’t used Audrey yet. So both would have worked well. In fact, Carl seems to have a slightly stronger smell and taste. So maybe I’ll give that one a try next.

So until we crack ‘er open and see what’s inside (and taste, of course) this will be it for this entry. See you in a few. 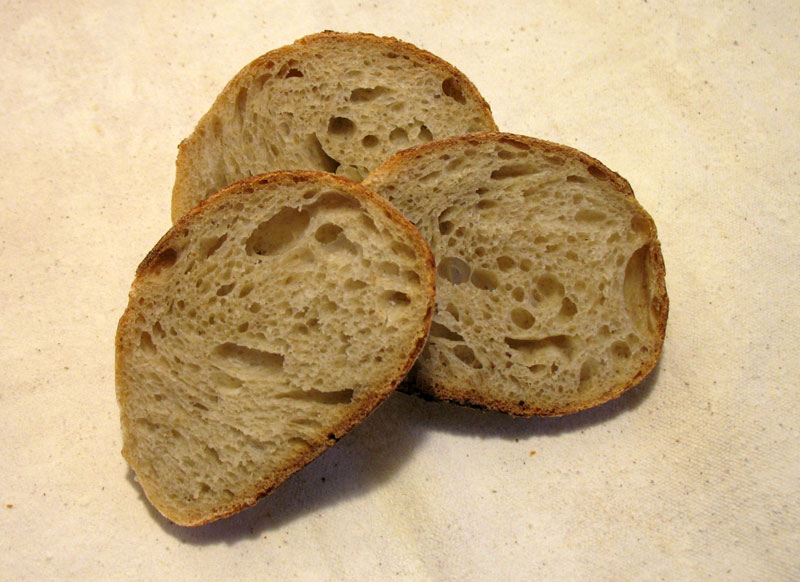 And there we are, the crumb. Nice mid-sized holes, the loaf shape is decidedly oval as opposed to pancake so we’re good here. The flavour is nice although not terribly sourdough-ish. Perhaps it will develop a little over the next day or so. Although I expect the loaf may not survive long enough to see. The other one needs to go in the freezer as there are already a couple of types of bread on the counter.

All in all, this one is a success. We’ll be making Hamelman’s Vermont again.