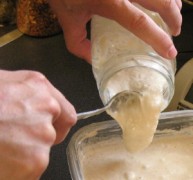 You see this question pop up all the time in sourdough discussions:

“Why do I have to discard? I hate the idea of throwing anything away. Can’t I just keep feeding the starter?”

Although reducing the waste we produce as a species is a good thing, there are times when it’s actually more logical to NOT do so. And feeding a starter is one of those times.

Let’s first see about the starter when you’re just starting it up from scratch.

Early in your starter’s young life, within the first two weeks or so of starting a starter from scratch, there is absolutely no good reason to save the excess “flour soup” you’re cutting back. It has done it’s job and is spent, and unless you’re building excessively large amounts (see the Starter Step by Step series to see the recommended  quantity), it should only be about 2 tablespoons of flour each day, this is not worth worrying about. Even if ditched directly into the trash or compost, it’s still not “wasted” any more than that nice dinner you ate yesterday was “wasted”: it was used to feed your starter, so it had a purpose and served it well. So right off the bat, we need to get out of this idea that bit of flour you used to feed our yeast is wasted.

Aside from the dubious economics this would entail, this “brand new starter” flour soup likely has a fair bit of seriously questionable bacterial activity still going on and even if it was $8 worth of flour as opposed to the mere 3¢ it more likely is, that stuff really NEEDS to be tossed out. Once your starter has matured, is expanding regularly and consistently and has developed a good, pleasant scent, if it’s ready to be used in bread, then it can be saved for other uses. But until that point, THROW IT AWAY (or put it in the compost). And if you could have smelled Wally in his first couple of days, you would most certainly not want to keep that.

But what about the starter once it’s become viable and working well?

Even after your starter has reached actual starter stage – this will take two or three weeks – there’s a simple reason why you need to remove your excess. And it is just that, “excess”. After having developed properly, there’s nothing “bad” about the amount you remove, it’s just as good a starter as what you keep; the left side of the jar is no different than the right side. So if you wanted to, you could give this fine starter excess away to friends who want a ready-made starter or use it in “discard” recipes like pancakes or english muffins or anything else you think the flavour might be a nice addition to. So if it’s just as good as the starter you keep, why not keep ALL of it then?

You really do want to reduce your starter. If you were to just keep adding and not removing any because you “hate to throw anything away”, here’s what you’d end up with in very short order.

One common method of feeding says to remove half your starter and add that much fresh flour/water again; for example, “Remove one cup of starter (from a two cups batch) and replace it with one fresh cup”. It is assumed here that this new cup is made of equal weights of water and flour.

For our project, we’re going to add that 50% starter but, because we’re testing the “don’t want to throw any out” idea, we will NOT be removing/discarding the original half. We also keep this hypothetical starter “out on the counter” and feed it twice daily, morning and evening, and go for one entire week for a total of 14 feeds.

We’ll start on day 1 with a very small amount of starter: 2 tablespoons or 1/8 cup. At each feed, we give it an amount of feed equal to the original starter. This is, in effect, a 1:½:½ feeding ratio (one part old starter given a half part water and a half part flour) which is really skimpy on fresh food. Personally, I’d want to give at least a 1:1:1 ratio – and in fact I feed mine at 1:2:2 which is plenty of food for that amount of old starter. If we followed that plan, the amounts we see below would increase even faster.

And just for fun…

Before you read the rest, take a guess at how much starter you’ll have at the end of one week, starting with just 2 tablespoons and feeding twice a day. Ok, got an amount in your head? Write it down somewhere… No cheating, can’t look at the end or change your mind, now!

Now let’s keep in mind we began with just two tablespoons. And of the final 128 gallon starter, only about 40 gallons of that is water, the other 80 gallons is flour (water is heavier than flour). That’s SIXTEEN five gallon drums. You will be running to the grocery store and buying out their flour supply in no time. That won’t be cheap.

You can discard a couple of tablespoons of flour at each feed and keep the starter at a reasonable size for your needs, whether that’s keeping it to 50g (about a quarter cup) or a little bigger because you bake a lot each week. But you’d be an industrial bakery pumping out thousands of loaves to be using up 128 gallons of starter. And besides, industrial bakeries don’t make real sourdough anyway, they just want to pump out ‘fluffy’ bread in 4 hours, tops.

Need a larger amount of starter for your baking day? Take one feed’s discard and build that up to that amount. Or collect a couple days’ excess starter and use it in other baking. 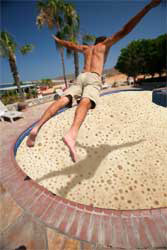 Now obviously no one would go anywhere near that far or even past a few days before realizing that NOT removing excess starter is insanely expensive, but it may not be obvious how FAST this adds up when you’re looking at your tiny 2 Tablespoons of starter and thinking it’s not worth throwing that extra tablespoon of flour out. Even by about day 4 you’d have got to the point where you’d need to throw out just under 1 gallon of starter to get back to a decent amount, so you’d be tossing at least 7 cups of flour away. Removing 1 tablespoon per feed over that same time is just 1/2 cup of flour.

And that, dear friends, is why it really does makes sense to dispose of a little bit of excess starter.

But I STILL don’t want to throw out any starter!

Actually, once you’ve passed the beginning stage, you really don’t have to. There are  ways you can manage your starter that doesn’t end up in just tossing away that excess. I discussed this and other ways to reduce or even totally prevent the need to throw out any starter in this post: The Waste Conundrum.

16 Replies to “Why Discard Starter: A Mathematical View.”