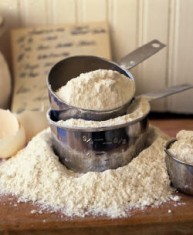 How much does a cup of flour weigh?

Here’s a question that seems to pop up on a fairly regular basis in the bread forums. Someone sees a recipe that requires 3.5 cups of flour, or one that looks for 368g of flour. Either way, they’re used to the other method of measuring and they run into problems making the conversion from one to the other.

Why is it confusing? Because one is a volume measure and the other is a weight measure. As we all know a cup is not always a cup:  a cup of rocks and a cup of feathers will not weigh the same. Simply stated, volume and weight are not a consistent and easily interchangeable form of measure. Add in the confusion of liquid vs dry ounces and cups and you have a mess.

But there’s probably a set “standard” weight for flour, right? I mean, measuring flour is something people do ALL the time and have done for eons so someone, somewhere probably has The Definitive Weight for a “cup of flour”.

Well, the short answer is: No.

One reason for that is there are several different versions of “cups”. Not only do you have a liquid and dry cup – your glass Pyrex cup is for liquids, your plastic or metal scoop set is for dry ingredients; most people aren’t aware of that. It is assumed the difference is simply one is usually easier to pour as they tend to have a handle and spout; the other is easier to level off because it is normally flat and you can run a straight edge – such as a knife – across the top to level it out.

But there’s also regional differences between cups. A cup in the US is 8 fluid oz US but 8.32 fluid oz UK. 1 oz  UK  is .96 oz US. If we look at smaller measures, 1 Tablespoon US is .5 oz but .52 oz UK. If you go with Australian measures a Tablespoon is different from either UK or US amounts.

Even within the US, a cup (liquid) and a cup (dry) are different amounts; if we look at the volume measure of a dry cup it is 225 ml while a liquid cup is 237 ml. This is why you can’t accurately measure flour in a glass Pirex (liquid) cup. So the measure switches and can be confusing if the type of measure isn’t clear. Obviously, one may “assume” that if you’re measuring flour, you’d use dry volume and not liquid. But are you sure the recipe’s author didn’t just grab their glass Pirex cup to measure the flour? If it doesn’t specify, you might assume wrong. Now if you’re adding one cup of water and one cup of flour, the difference may be minor but when you get into several cups it may start seriously affecting your finished bread.

But let’s keep the discussion at converting flour from volume to weight (or weight to volume) and see how that works.

There are many sources for what one might hope is a “standard” for this conversion. You might think that with all the bread baking books out there, surely there’s a consensus within the professional baking stratosphere. You’d think anyway, right?

Here’s a brief rundown of what professional bakers use in their books, based only on the books I have in my personal collection. I’ve taken each author’s equivalence and, where they give (dry) oz but not grams, I’ve used a converter to get the missing info. It is internationally accepted that a US dry ounce (oz) is 28.349 grams.

Going from smallest to largest, all from professional US bakers:

And that’s just based on the books I happen to have. If your library is different or you hunt up a conversion table online, you’ll likely have various other amounts. According to one online converter I checked while writing this, 1 US cup of all purpose flour was 99g, even less than the above list.

So as you can see, there’s some wiggle room and certainly no “definitive” weight for a cup of flour. Even between the different flour manufacturers, their expected amounts vary. If you look at their nutrition labels, they’ll usually list their values per  “1/4 cup (30 grams)” or 33g or 28g or… It’s usually just on the bigger 20 kilo or 50 lb bags that you might see “per 100g”. But even then, not always.

And after you’ve put in “exactly” that much flour, you may still need to “adjust as necessary” anyway to compensate for your particular flour’s humidity and water absorption and to get the consistency the recipe wants (tacky, sticky, etc.). Different brands of “bread flour” are not all created equal.

So what’s a baker to do? Use digital scales and use recipes that specify weights, whether by dry ounces or grams. American cookbook publishers –  not necessarily the authors –  are notoriously reluctant to give up the volume measure for dry ingredients although many recent books are at least giving multiple measures, so if the author says “4½  cups of flour” there will hopefully at least be an equivalent weight included in dry ounces and, with luck, grams as well, if not right there in the recipe, perhaps somewhere in the introduction section.

Also, keep in mind that many baker authors bake in large quantities so the recipes they use themselves are large and use big 20 kg bags of flour as a basis. So when they pass these recipes on to the book’s editors, they are the ones left to scale down the recipes to “home” sizes. And often enough, the editors mess up the conversions. While the original recipe the baker author uses is tried and true and most likely in grams, what comes out in print can have a fair number of errors. In such cases, don’t blame the author and instead go by the larger volume amounts and scale down from that yourself. Chances are you’ll be more accurate this way.

For example, I have Jeffrey Hamelman’s book Bread: A Baker’s Book of Techniques and Recipes open here (I just made some Vermont Sourdough, p. 153) and his formula for this bread specifies, for the home size batch, “4.8 oz (1 cup)” of bread flour. In his Fougase with Olives recipe (p. 278) he gives 4.3 oz for 1 cup. Why the differences in the same book? Mr Hamelman rounds his cup amounts up or down to “closest” to weight simply for home bakers’ convenience; in other words, his posted cups are near the more precise weight amounts. The real recipe is in weights, the volume equivalents are best estimates. See page 90 for his explanation where he states, right at the start ” Cups and tablespoons are inherently inaccurate…”.

So according to the Yumarama Bread Blog, how big is a cup of flour? I presume 4.5 oz or 127 grams unless a specific weight is given in the recipe or elsewhere in the book. If I can, I’ll always try to go for a recipe that includes weights over one that uses only cups. And better still if it includes grams as they’re much easier to increase/decrease and, being smaller, are more accurate.

So if you don’t own one already, go out and get yourself a good digital scale. It won’t cost a huge amount, probably in the $20 to $30 range for one with both ounces and grams. I have a detailed post, Digital Scale: Which weigh to go?, with suggestions on what to look for in a digital scale and what to avoid.

7 Replies to “How big is a cup? Flour volume vs flour weight”